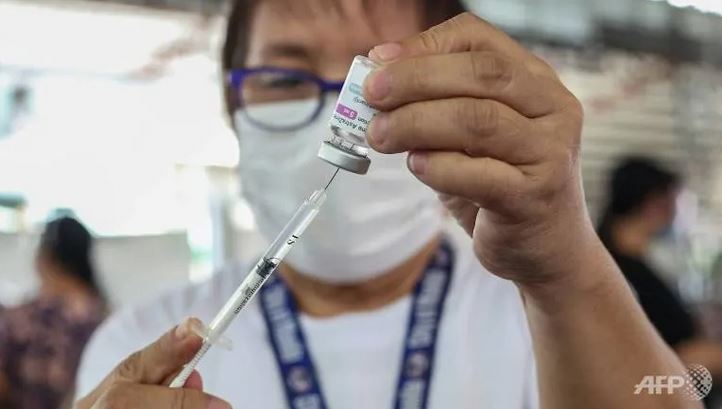 The Philippine health department suspended on Apr 8, 2021 the use of the AstraZeneca COVID-19 jab for people under 60 after reports of blood clots overseas. (Photo: AFP/Jam Sta Rosa)
MANILA - AFP

The Philippine health department suspended on Thursday (Apr 8) the use of the AstraZeneca COVID-19 jab for people under 60 after reports of blood clots overseas, in a setback for the country's already slow vaccine rollout.

It comes amid a record surge in coronavirus infections that has forced more than 24 million people in the capital and surrounding provinces into a lockdown.

Several European countries have suspended the use of AstraZeneca's vaccine for younger populations after it was earlier banned outright in several places over blood clot scares.

The EU's medicines regulator said on Wednesday blood clots should be listed as rare side effects of the jab, but the benefits continue to outweigh the risks.

"While we have not seen such incidents in the country, the FDA has recommended to temporarily suspend the use of the vaccine for persons below 60 years old as we await results of the review being done by our local experts, as well as the official guidance of the WHO," Food and Drug Administration director-general Eric Domingo said.

The Philippines has received about 2.5 million doses of COVID-19 vaccines so far - the majority from China's Sinovac.

It also got 525,600 AstraZeneca doses through the COVAX programme, most of which have been administered already, according to official data.

The country expects another 3 million AstraZeneca doses in the coming months.

President Rodrigo Duterte's government has been skewered by critics over its handling of the pandemic and efforts to secure vaccines.

The 2.5 million doses received so far represent a fraction of the shots Manila has been negotiating with seven manufacturers to secure.

The bulk of the supply is not expected until later this year.

But the challenge is not limited to stock.

Low public confidence in vaccines remains after the country became the first to deploy the dengue vaccine Dengvaxia in 2016.

A botched rollout led to unfounded claims that several dozen children had died from the jab, and a recent survey showed about 60 per cent of the population were unwilling to be inoculated against COVID-19.

"I want to emphasize that this temporary suspension DOES NOT MEAN that the vaccine is unsafe or ineffective - it just means that we are taking precautionary measures to ensure the safety of every Filipino," Domingo said in the statement.

The World Health Organization's Western Pacific office on Wednesday backed the use of the AstraZeneca vaccine in the region.

"Available data do not suggest any overall increase in the clotting conditions in the vaccinated population as compared to the general population," Socorro Escalante, WHO essential medicines coordinator, told reporters.

The European Medicines Agency examined 86 blood clotting cases, 18 of which were fatal, out of about 25 million people in Europe who received the AstraZeneca vaccine. Most of the cases were in women aged under 60.