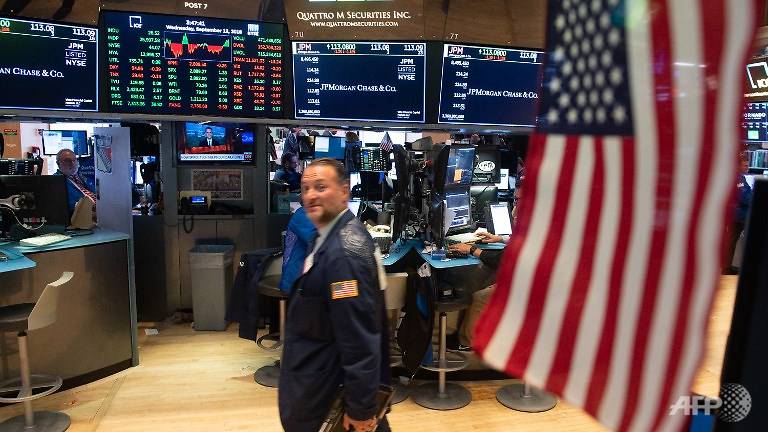 Traders work on the floor at the closing bell of the Dow Industrial Average at the New York Stock Exchange on Sep 12, 2018 in New York. (Photo: AFP/Bryan R Smith)
NEW YORK - AFP

US stocks end near flat amid trade war uncertainty

But the market pulled back a bit later following a Federal Reserve report chronicling rising anxiety across the United States about trade tensions, with some businesses planning to curtail capital spending amid the fog.

A new lobby group called Americans for Free Trade announced plans to campaign against tariffs in the upcoming mid-term elections.

Apple, which jumped Tuesday in anticipation of a big company event, dipped 1.4 per cent after unveiling updated versions its priciest iPhones, along with a new smartwatch that allows users to take their own electrocardiograms.

Large banks were generally weak, with JPMorgan Chase, Bank of America and Wells Fargo all falling at least one per cent as US Treasury bond yields declined.

Semiconductor shares fell after Goldman Sachs downgraded both Micron Technology and Lam Research, which lost 4.3 per cent and 3.2 per cent respectively.

US wholesale inflation fell for the third month in a row in August on weak wholesale margins for machinery and equipment, according to Labor Department data. The report comes ahead of the much-anticipated consumer price data due on Thursday.