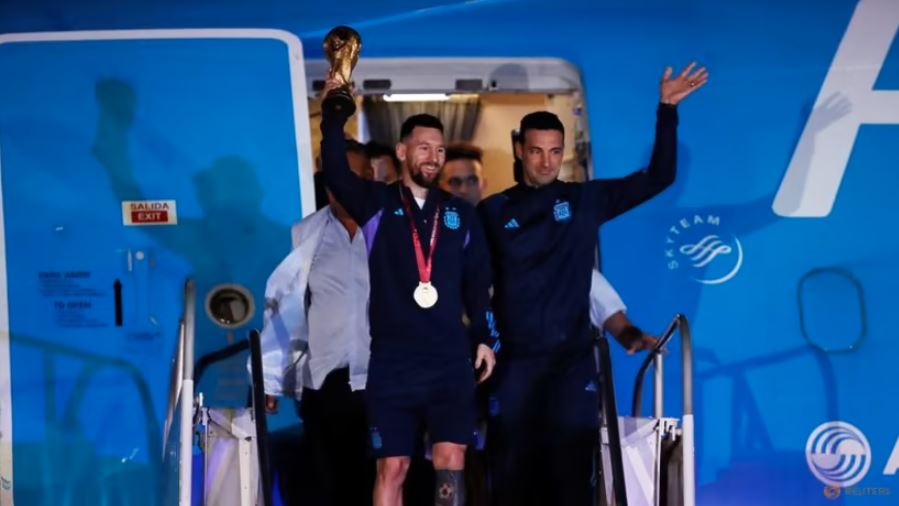 "If I have to choose one I choose Leo, I have something special with him. He is the best of all time although Maradona was also great," Scaloni told Spanish radio station Cope on Tuesday (Jan 17).

Argentina fans have long preferred Maradona over Messi but attitudes appear to be shifting after the Paris St Germain forward led the team to lift the World Cup last month for the first time since Maradona inspired them to win it in 1986.

Scaloni also revealed that he prioritised speaking to Messi when he was named Argentina coach in 2018, while the forward was taking a break from international duty following the disastrous World Cup in Russia.

"The first thing we did was have a video call with Messi. He said he was honoured and the first thing we said to him was 'Come back. We'll wait for you'. That's what we did and eight months later he came and found an incredible group," Scaloni added.

"Coaching Messi is not difficult. You cannot correct him on a technical level but sometimes you can instruct him to press or to attack in a certain way. When he smells blood he is the number one."

Scaloni also defended his goalkeeper Emiliano Martinez after he was criticised for his overzealous celebrations following Argentina's triumph, such as making an obscene gesture when collecting the Golden Glove award and carrying a toy baby with Kylian Mbappe's face on it during the open-top bus parade.

"There are attitudes which he will not be happy with, but he is a spectacular guy. He is like a child. He is an incredible guy, his personality has given so much to the group," Scaloni added.