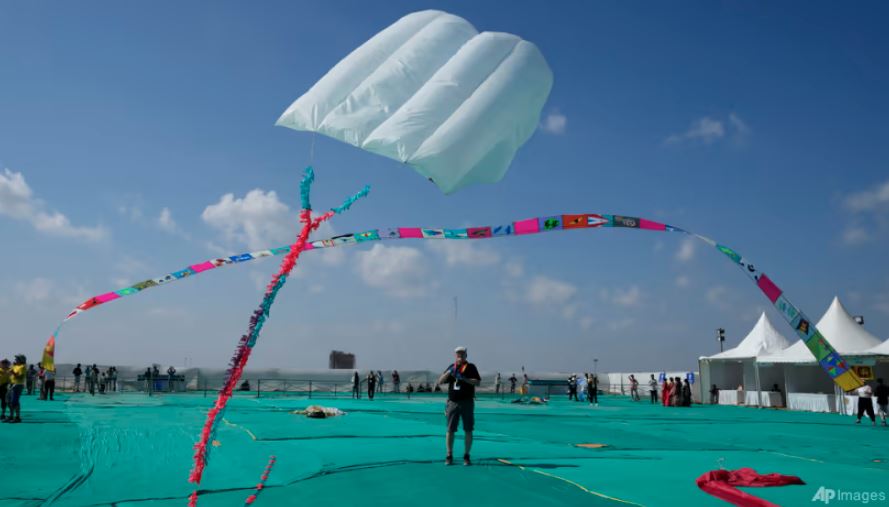 A man flies a kite during the International Kite Festival at Dholera near Ahmedabad in Gujarat state, India, on Jan 12, 2023. (Photo: AP/Ajit Solanki)
CNA

3 children among 6 killed by kite strings at Indian festival

Six people - including three children - died after their throats were cut by kite strings during a festival in India's Gujarat state, according to local media reports.

The incidents reportedly occurred last weekend, when large crowds turned up for the International Kite Festival in Gujarat.

According to officials, there were several cases of revellers using sharp strings to fly their kites.

Glass-coated kite strings, also known as Chinese manjha, were said to be the main cause of the incidents, and they remain readily available despite a ban on their use.

The kites ended up getting entangled around the necks of the victims, causing serious injuries and in some cases, deaths, the Press Trust of India (PTI) reported.

The majority of the incidents involved two-wheelers and their pillion passengers.

The youngest of the victims was reportedly a two-year-old girl. Her neck was cut by a kite string while out riding with her father on a two-wheeler in the city of Bhavnagar.

She died in the hospital on Sunday, an Indian police official said.

In another case, a three-year-old girl died while walking home with her mother in the town of Visnagar on Saturday. She was declared dead on arrival at a nearby hospital, reported PTI.

A seven-year-old child also died after his throat was slit by a kite string while riding with his parents on a two-wheeler, while three men on two-wheelers died in the same way.

In separate incidents caused by kite strings, there were instances of people getting injured after falling from height while out flying kites, according to emergency services.

Hundreds of birds and animals were also injured due to the strings, officials added.