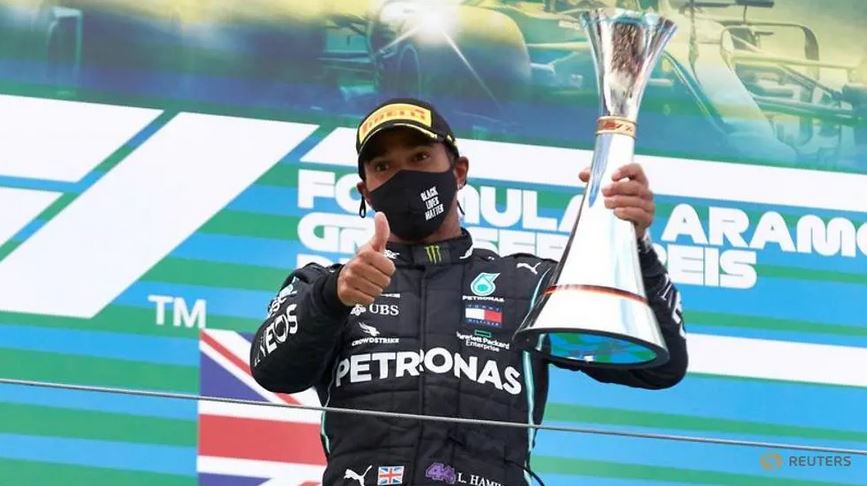 Lewis Hamilton looks sure to become the most successful Formula One driver of all time but argument about the greatest will rumble on.

But the Mercedes driver, who equalled Ferrari great Michael Schumacher's all-time record 91 wins in Sunday's Eifel Grand Prix and is heading for a seventh title, said that did not matter to him.

"There's a lot of talk in all sports about greatest, past and present, and I think it's almost impossible to compare," said the Briton.

"There's all this talk of who is and who is not and it's not important to me. What's important is the journey...it's what we've done along the way, the obstacles you've faced. And everyone's got a different journey."

Triple world champion Jackie Stewart, previously Britain's most successful driver, said last week Hamilton would not be in his top three because there were so many more races now and the Mercedes was so superior.

The sport's only Black driver, who has broken down barriers and spoken out on a range of subjects from racial injustice to the environment, said he got knocked by many people and especially older drivers.

"Maybe one day they'll get over it," Hamilton said.

"I have so much respect for the past legends, even those that do continue to talk negatively about me all the time. I still hold them in high regard because I know it was a different time in history. It was incredibly tough for them.

"In 20 years' time when I'm looking back...I will not be talking down any young driver that's coming through and succeeding, because a responsibility as an older driver is to shine the light as bright as possible and encourage those.

"There's going to be someone else, whether it's Max (Verstappen) or whoever, chasing the record that I eventually set. It's the wrong approach to be hoping he doesn't break it."

"You should be encouraging them to live to their full potential and if that means them getting to that record, that's amazing."

Hamilton was presented with one of Schumacher's helmets by the German's son Mick after the victory at the Nuerburgring, with the youngster offering the family's congratulations.

The sense of achievement was not lost on his rivals, either.

As Australian Daniel Ricciardo observed, if Hamilton had taken his 91 wins consecutively then nobody else in Formula One would have had a look in for the past four and a half seasons.

"It’s incredible and very impressive. And I’m pretty sure there will be some more victories coming his way, and probably also championships," said Red Bull's Verstappen, runner-up on Sunday.

Hamilton is now 69 points clear at the top and closest rival, Mercedes team mate Valtteri Bottas, recognised it would take a miracle to stop him taking the title.

Many more wins will surely follow for a man who has averaged 10 a season since 2014. He is on seven for 2020 with six races remaining.

The tally could be well past 100 before Hamilton hangs up his helmet, with rules and cars staying substantially the same next year.

Mercedes have won both titles for the last six years and are set to make that seven, with Hamilton likely to be around for some time to come even if he has yet to sign a new contract.

"Hopefully, we have got more records to break and to make," he said on Sunday.