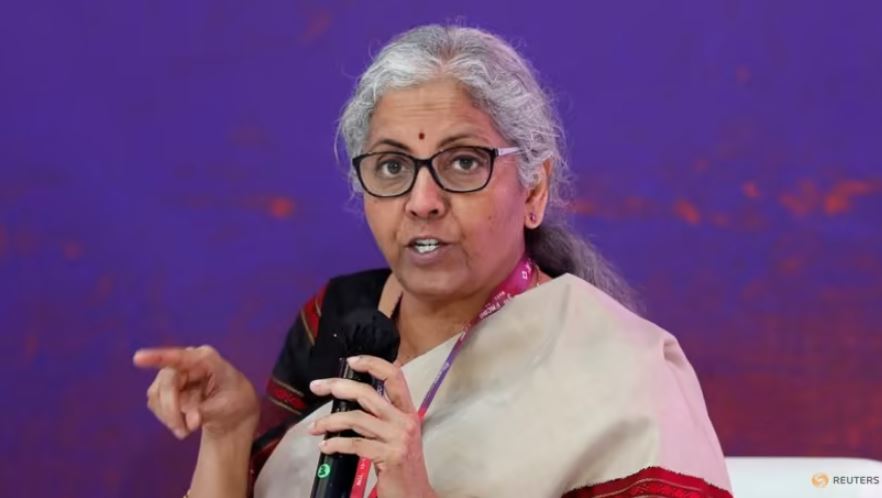 The Indian government will present a budget on Feb. 1 that will likely put deficit reduction ahead of vote-winning spending, even as Prime Minister Narendra Modi looks towards seeking a rare third term of office in 2024.

Officials and economists said the large size of recent deficits and a need to gain investor confidence was forcing fiscal caution on the government, overriding the contrary priority of spending to support a weakening economy.

In pulling back the deficit, Finance Minister Nirmala Sitharaman's budget for the financial year beginning April 1 will also help hold inflation below the top of the central bank's target range, 6 per cent. 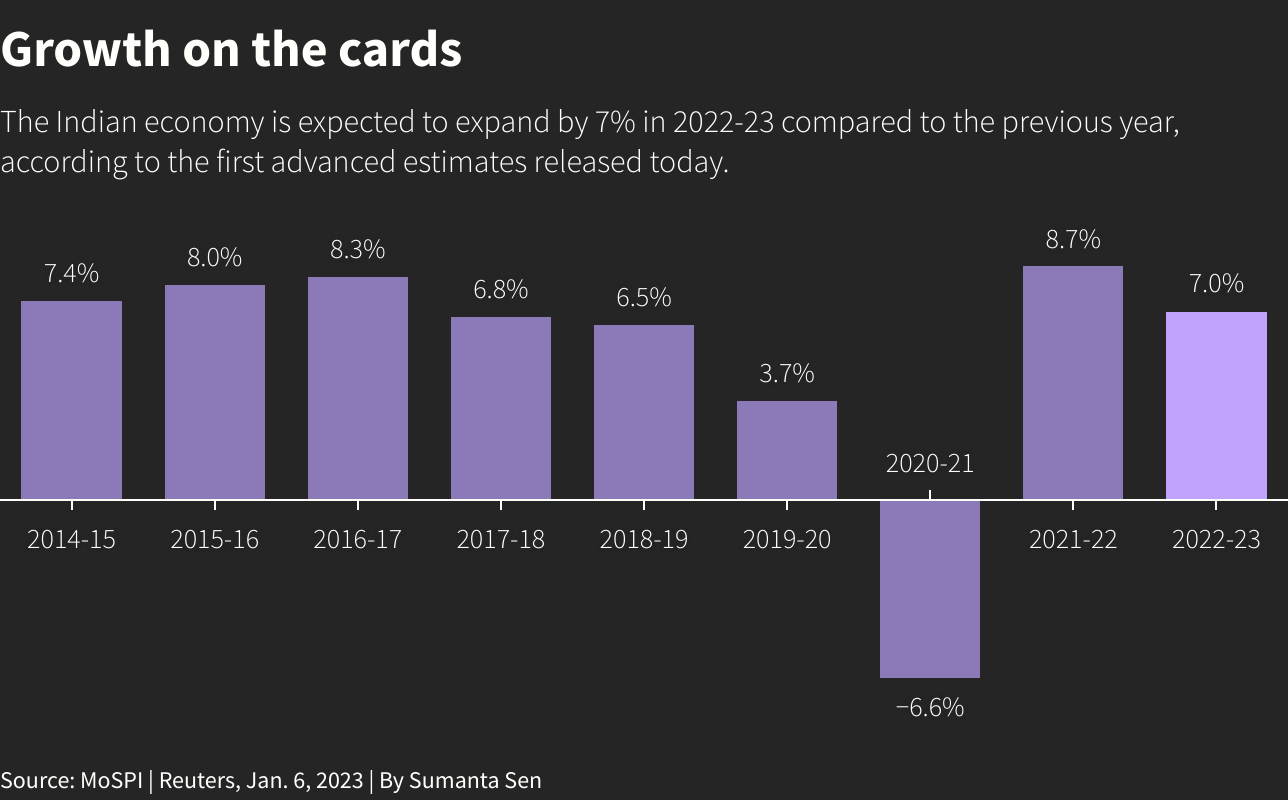 (Graphic: Growth on the cards)

As India faces weakening demand for its exports from the slowing economies of trading partners, its own growth is still recovering from the damage of pandemic controls.

During the pandemic, India had to spend billions of dollars to provide food to the poor, cheap loans for small businesses and free vaccines, pushing the fiscal deficit to a record 9.3 per cent of gross domestic product (GDP) in 2020/21.

Debt issuance soared, and some of those bonds are maturing and must be refinanced, further limiting the government's room for manoeuvre.

The federal government is likely to cut its fiscal deficit to between 5.8 per cent and 5.9 per cent of GDP in 2023/24 from the 6.4 per cent of 2022/23, other officials have said. The deficit will remain much larger than the 4 per cent to 4.5 per cent of GDP that was usual for decades.

The government now hoped to return to those historical levels by 2025/26, said two officials who were familiar with budget planning but asked not to be named. 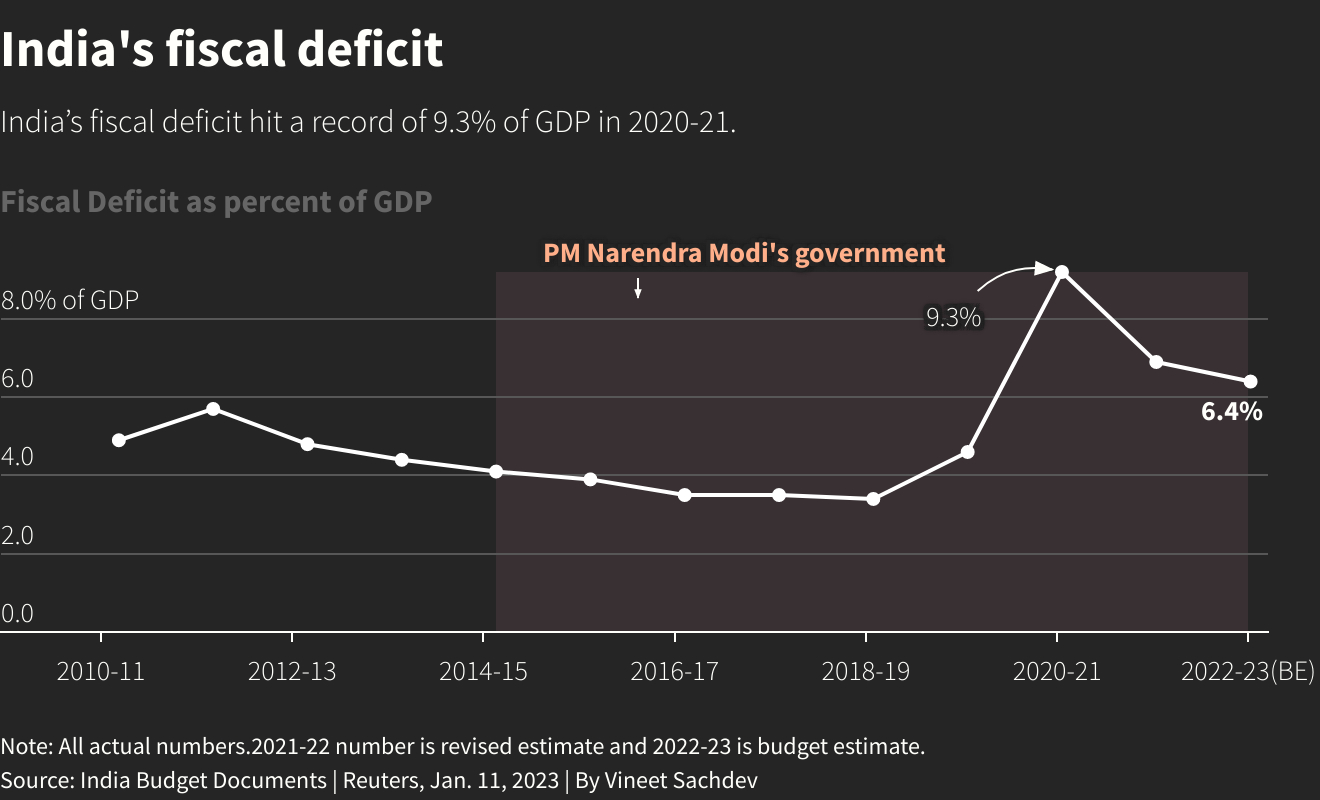 The international slowdown will hold down growth in nominal GDP - real growth plus inflation - to about 11 per cent for 2023/24 from an estimated 15.4 per cent for 2022/23. That will lead to lower growth in tax collection.

Just a year away from elections, the government may be unable to raise more funds by stepping up the pace of selling state-run companies, a generally unpopular measure.

Sitharaman will therefore have little room to provide significant tax breaks for the salaried class and will have to substantially lower subsidies that help the poor.

"The government's promised fiscal consolidation path will require a Herculean effort over the next few year," HSBC economist Pranjul Bhandari said, adding that cutting budget deficits would be necessary for controlling inflation.

The government has already stopped the pandemic-era free food programme and is expected to cut subsidies for food and fertiliser by nearly $17 billion.

As current expenditure falls, capital expenditure will probably grow but at the slowest rate seen in three years, the two officials said.

Modi's government in the past has used the budget document to lay out a broad economic vision and social agenda. One, in 2014, was called "Sabka Saath Sabka Vikas", loosely translated as "inclusive growth"; another in 2020, "Aatmanirbhar", meaning "self-reliance", aimed to cut dependence on imports.

India has not met many of those objectives and is struggling to create enough jobs. Economic growth is no longer as fast as it was before 2014.

Yet Sitharaman is expected to again express a long-term vision, this time for spending tens of billions of dollars on infrastructure, green projects, health care and education.

Funds towards health, education and defence are likely to grow at not more than 10 per cent to 12 per cent for the current year, the two officials said.

The government is expected to borrow a record 16 trillion rupees in 2023/24, according to a Reuters poll.