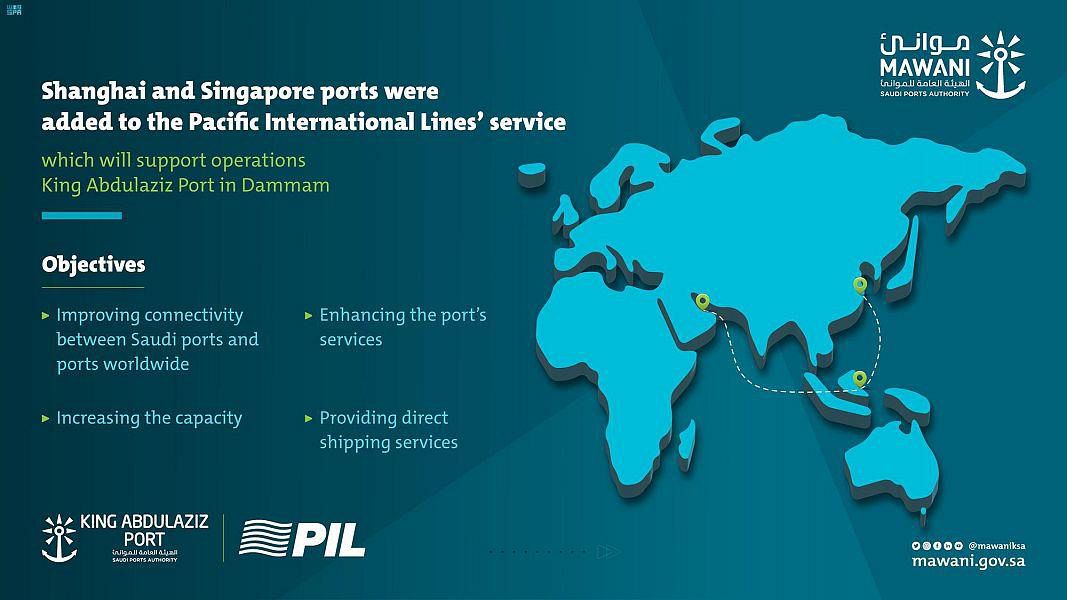 The Saudi Ports Authority (Mawani) has announced the addition of two ports calls, Shanghai and Singapore, to the Gulf China Service (GCS), a direct weekly service launched by Pacific International Lines (PIL) to connect China with the Gulf area in the Middle East, which will contribute to increasing the capacity to support imports and exports operations in King Abdulaziz Port in Dammam.
This step aligns with the shipping lines’ aim to expand and add new shipping services, which will reflect positively on the efficiency of services provided for local and international importers and exporters.
The Authority ensures the continuity of providing efficient direct services to customers and shipping agents, as it recently added (7) new shipping lines services to strengthen Saudi ports’ connectivity with ports around the world, by attracting major shipping lines which will contribute to saving time and effort for importers and exporters, as well as enabling imports and exports of national products, in lines with the objectives of the National Transport and Logistics Strategy (NTLS) and Saudi Vision 2030 objectives of positioning the Kingdom as global logistics hub.
Mawani’s continuous efforts of developing the King Abdulaziz Port in Dammam which operates with a total area of 19 km2, along with 43 integrated berths fully equipped to receive the largest vessels, as well as 3 advanced container terminals with 105 million tons capacity, as the port managed during 2021 to handle 32,553,570 tons of cargo, while the containers volumes reached a total of 1,780,350 TEUs during the same year.