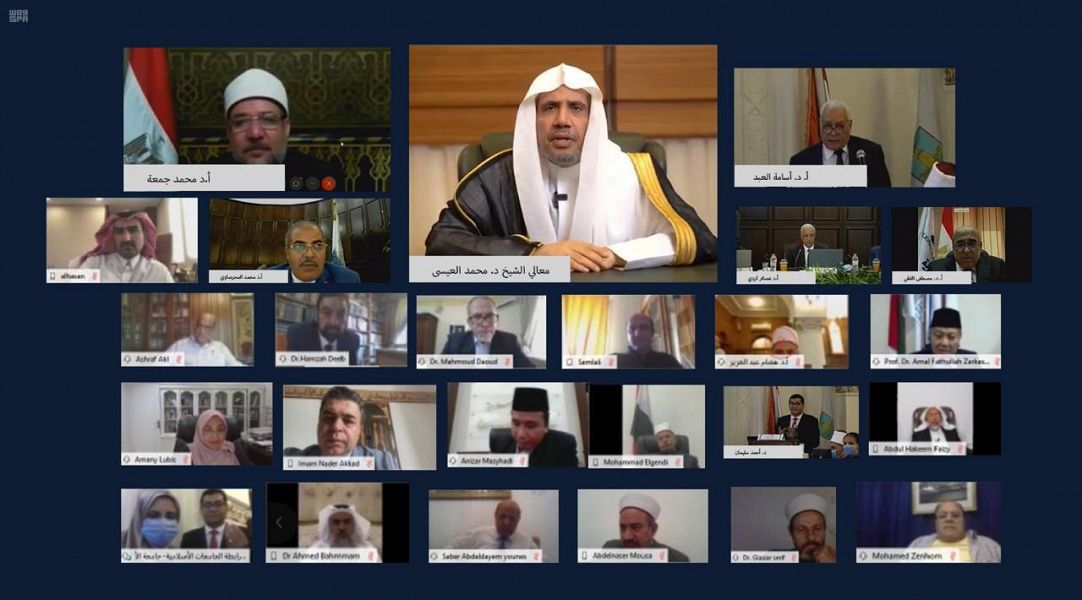 The virtual international conference, "Role of Universities in Serving Society and Consolidating Values" wrapped up its activities in Cairo. The conference was organized by the League of Islamic Universities, with the cooperation of the Muslim World League (MWL), Egypt's Ministry of Al-Awqaf, Al-Azhar University, Alexandria University, and the Prince Khaled Al-Faisal for Moderation at King Abdulaziz University, and with the participation of a number of ministers, eminent scholars, international organizations and educational institutions.

Conferees demanded the universities ’contribution in the face of all forms of extremism, spreading discord and rumors, as well as issuing an ethical charter for Islamic universities.

Conferees called for supporting the supreme values of humanity ​​and affirming an established fact that followers of religions and cultures share values ​​that should be highlighted in the system of general values.

The conference also recommended that universities must open their doors without restrictions in two directions, the first is to receive ideas from the elite of thinkers in society for study, analysis and reformulation in accordance with the requirements of each stage, and the second is to promote legitimate freedoms within the university professors community, and to work on the quality of educating students of different universities on the geography and the history of Arab and Islamic nations to enhance their national identities and loyalties and pride in the system of their Arab and Islamic nations.

The conference was opened with an address by His Excellency Sheikh Dr. Muhammad bin  Abdul Karim Al-Issa, Secretary-General of the Muslim World League (MWL) and President of the League of Islamic Universities, in which he referred to the distinction of this conference with its attendees and theme to discuss several axes that are considered among the major tasks entrusted to the League of Islamic Universities.

He asserted that the responsibility of the League towards societal affair is great, saying: "We will not find a more informed, insightful analytic discourse than the efforts of the scientific and academic elite participating with us in this conference, while granting their solid knowledge, thought and experience."

Sheikh Al-Issa continued, "Reformers often raise slogans and calls to address community issues, especially addressing academic institutions. The universities of our Islamic world have demonstrated their credibility and determination when they established their blessed league that combines its consistent work in the unity of its vision, mission and goals for their own good and the good of their societies and world. The sharpened awareness of the League has effectively contributed to finding solutions to a number of issues."

He added, "The themes of this conference are of this type that has encountered a myriad of challenges, and even multiple transformations. The society must be assigned to this league thanks to its size, capacity, high competence and sense of responsibility."

He went on saying, "Our Islamic societies are in dire need to strengthen their system of values ​​in order to preserve their unified identity. Our nation has unified mission, values and goals, no matter how diverse its races, colors and tongues, and no matter how many national states are, their conscience is one. Plurality and diversity increase it strength and enthusiasm to reinforce its cohesion and to show the whole world that it is one body, and that its organs, no matter how different and varied, are one body in good and bad times. We all hope that the final statement of this conference will fill everyone's aspiration towards it, with its scientific survey and exploratory studies in its hands, which are increasing and adorned with their enhanced successful dialogues."

He added, "We are also happy today to launch the visual identity of the League of Islamic Universities through its new logo, which carries several connotations that highlight the authenticity of the League for its ancient heritage, and its keeping pace with everything new."

His Excellency stated: "The League of Islamic Universities is working, with the help of Allah Almighty, to expand its missions and activities around the world, relying on the authenticity of its identity and the integrity of its curriculum, as well as its competencies working within its regular entity, or in the system of universities included in its membership."

He said, "Our aspiration also extends to the competence of the young students of our Islamic universities, who will take part in the League's global future activities, and the League will embrace them, and will also be the base for launching their energies and contributions around the world, sponsoring their talents and creativity materially and morally. The League will deepen its bonds with all member universities so as to achieve more connotations for its name and capacity, in terms of its serious vision, mission and goals."

For his part, His Excellency Dr. Muhammad Mukhtar Gomaa, Egypt's Minister of Awqaf and Chairman of the Supreme Council of Islamic Affairs, thanked the League of Islamic Universities for choosing this significant topic, stressing that recognition of the crisis is the first way to solve it.

He emphasized that nations that are not based on noble morals and values ​​carry the factors of their downfall in their structure and the basis of their establishment, and all people with their normal instincts have nothing but respect for the owner of good manners, whether a person or a nation.

He stressed that universities can contribute greatly to rectifying behavior and restoring our noble values and morals, whether through their curricula, the research they produces or their professors who serve as role models. In the same context, he called for establishing a true and serious code of conduct for every university student, and indeed for every student at every stage. He said, "As we measure the students' scientific level, we should measure their behavior and keenness to maintain noble values ​​and morals."

In turn, His Excellency Mr. Dr. Muhammad Al-Mahrasawi, President of Al-Azhar University, reviewed Al-Azhar University's contributions to confronting the Corona epidemic, and projects carried out by its students to eliminate environmental contamination, invest waste from the environment and convert it into soil fertilizers, as well as providing job opportunities and eliminating unemployment.

On the other hand, His Excellency Dr. Abdul-Nasser Abu Al-Bassal, former Jordanian Minister of Awqaf, Islamic Affairs and Holy Sites, stressed the need for a serious review of everything related to the educational system to meet the needs of the nation, keep pace with the times and face its challenges, and also the need to reconsider our strategic plans in light of contemporary developments, especially after the repercussions of this very dangerous epidemic, which brought to the surface our need to rearrange our priorities and the consequent reformulation of plans, curricula and programs, and focusing more on strengthening communities internally and externally, and activating the foundations of unity among the people of the Islamic nation.

He called for the establishment of a special section within the League of Islamic Universities to evaluate and classify universities in terms of scientific research and the quality, progress and development of programs, and to honor the universities that get first ranks.

For his part, His Excellency Prof. Osama Al-Abed, Secretary General of the League of Islamic Universities, affirmed that university education is one of the essential elements in supporting human development worldwide. The university is mainly concerned with building people scientifically, culturally, socially and morally.

He said, "Attention to the pillars of the educational process, including professors, students and curricula, is extremely important. University education is one of the most important forces that achieve economic development, progress and prosperity, and therefore the relationship between the university and society must be established by developing scientific and applied research and linking it to the reality of work and production."

His Excellency Dr. Mostafa El-Feki, Director of the Bibliotheca Alexandrina, stressed the importance of the university as a community thermometer and a measure of progress, and no sane person can argue about its importance and role. Therefore, the process of modernization and progress is linked to universities and their role in societies.

He said, "We should always feel that we are true contributors to the scientific and human heritage everywhere and we are never dependent on it, and if the cycles of civilizations have caused us to retreat, then this is definitely interim."

His Excellency Dr. Essam Kurdi, President of Alexandria University, confirmed that the conference touched on the decisive role of these universities in the Islamic world which is currently experiencing a delicate and dangerous phase in its history.

He stressed the importance of concerted efforts of Islamic universities to be, as always, beacons for professors and real education, inspired by the authentic Islamic values ​​in all areas of life, especially in the age of globalization and communications revolution, which turned the whole world into a single global village.

Dean of the Prince Khalid Al-Faisal Institute for Moderation at King Abdulaziz University, Dr. Al-Hassan bin Yahya Al- Manakhrah said that such a conference is an opportunity to exchange knowledge, present experiences and benefit from the experience of universities in the area of promoting ​​and employing values under the banner of the League of Islamic Universities which strives to collect expertise and knowledge under one umbrella to make it easier for specialists to deliver and benefit from each other.

Dr. Muhammad Al-Bashari, Secretary-General of the World Muslim Communities Council, Vice President of the League of Islamic Universities, said, "The Corona crisis represented a new and unprecedented turning point in the history of educational institutions in the world to deal with this crisis. This, in turn, created a new reality that will push the education authorities to reconsider the higher education system in terms of its philosophy, goals, systems, methods, curricula, activities, and the world's need for higher education in light of the failure of research centers and universities to find a cure for the virus to this very moment."

He emphasized that this conference introduces us to causes of wrong thinking that the programs of our Arab and Islamic universities should avoid, so that they do not turn into barracks that mobilize our children into bloody and terrorist militias against the interests of the national state.

He concluded by saying, "The League of Islamic Universities has a pivotal role in building a comprehensive strategy to confront extremism and terrorism, helping the educational institutions in what they do, focusing on the preventive aspect of extremist ideology by educating students about the dangers of this thought or by establishing a system of positive and moral values ​​that protect them against any extremist or alien ideas."