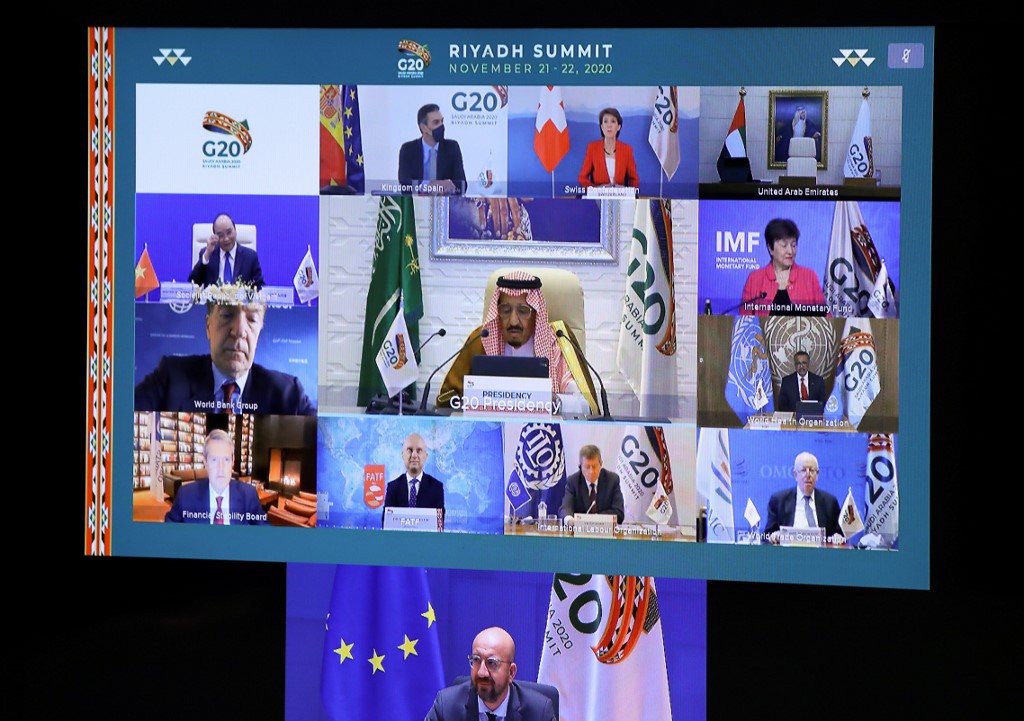 Saudi Arabia hosted the side event on Safeguarding the Planet during the second day of the summit. The event was held virtually and led by the Custodian of the Two Holy Mosques, King Salman bin Abdulaziz Al-Saud.

The Custodian of the Two Holy Mosques, King Salman bin Abdulaziz Al-Saud opened the side event, indicating G20 commitments towards safeguarding the planet. The Saudi G20 Presidency is driving an ambitious approach to Circular Carbon Economy (CCE) to manage greenhouse emissions across the world and industries to protect the planet:

“Your Majesties, Your Excellencies, Your Highnesses,

I am honored to welcome you to the second side-event which will focus on safeguarding the planet within the framework of the circular carbon economy.

As we recover from the repercussions of the pandemic, we must create the conditions conducive of robust, inclusive, balanced, and sustainable economies by means of enabling people, safeguarding the planet, and shaping new frontiers to seize the opportunities of the 21st century for all.

Safeguarding the Planet is of critical importance. With the increase in emissions due to economic and population growth, we must pioneer sustainable, pragmatic, and cost-effective approaches for achieving ambitious climate goals.

In this spirit, the Saudi Presidency has promoted the Circular Carbon Economy (CCE) that allows holistic management of emissions to mitigate the challenges of climate impacts and advance cleaner and more sustainable energy systems as well as advancing stable and secure energy markets and energy access.

Through this initiative, countries will be able to adopt and promote technologies that match their transition paths through the 4Rs of the Circular Carbon Economy (Reduce, Reuse, Recycle, Remove). Together, the “4Rs” comprise a  holistic, integrated, and pragmatic approach that values all options to managing emissions in all sectors.

The Kingdom will formally launch a dedicated Circular Carbon Economy National Program that will consolidate and accelerate the current momentum toward sustainability in a holistic manner. We ask other countries to work with us to help achieve the goals of this program: tackling climate change while continuing to create growth in the economy and increase the well being of humanity. In 2012, we launched the Saudi Energy Efficiency Program, a cornerstone of emission reduction within the framework of CCE.

In the Kingdom, we have many existing initiatives that capture carbon and turn it into valuable feedstock. This includes the world’s largest CO2 purification plant built by the Saudi Basic Industries Corporation (SABIC)  with a capacity of 500,000 tons per year and Saudi Aramco’s enhanced oil recovery plan with 800,000 tons per year of CO2 emissions. Likewise, in NEOM we are developing the largest green hydrogen plant.

Recognizing the important role nature-based carbon sequestration, the Kingdom has been advocating the  ambitious goal of conserving, restoring and sustainably managing 1 billion hectares of degraded land by 2040.

In addition, we have great plans for renewables, including wind and solar which will generate 50% of the Kingdom’s electricity by 2030.

In this regard, we would like to listen  to our colleagues about their different initiatives and aspirations in this area.

A number of G20 leaders stressed the importance of the joint action to safeguard the planet, address climate change and preserve the environment in order to achieve a carbon-free world.

During the second side event on Safeguarding the Planet on the sidelines of G20 Leaders' summit, the Prime Minister of Italy, Professor Giuseppe Conte, said in a speech that the next G20 leaders' summit 2021, to be held in Italy, will seek to enable ambitious, forward-looking agreements within the framework of the Rio conventions (3) on biodiversity, climate change and desertification and the impact of the epidemic on social and economic systems.

He added that in our capacity as chair of the next G20 summit, we will focus on climate energy relations and on how to achieve a rapid transition to a carbon-free future and the basis for the natural economy.

He stressed that the Kingdom of Saudi Arabia's proposal for the carbon circular economy approach would play a significant role in the transition.

"The urgent need to reduce emissions is inevitable. This should be the focus of all efforts to combat climate change," he added.

In his speech during the second side event of "Safeguarding the Planet" on the sidelines of the G20 Leaders' Summit, the Japanese Prime Minister said that the global environmental issues are urgent challenges that the international community should address.

"We, the G20 leaders, need to take the lead and work together as a team for this great mission of ‘Safeguarding the Planet’. Japan will take the initiative while continuing further collaboration with other countries,” he added.

For his part, Prime Minister of Australia Scott Morrison stressed that the year 2020 was a severe test, and we had to focus on the moment and the immediate response to the Coronavirus.

In his speech, he pointed out that the next year will be tough because the recovery is never easy and we must have an eye to the future, and we must safeguard our planet as it is an ongoing, long term collective responsibility.

He thanked the G20 Presidency for holding this important event and providing a forum for discussing the several ways to achieve the sustainable recovery, pointing out that the G20 is in strong agreement about the importance of preserving our oceans.

Meanwhile, President of the People's Republic of China Xi Jinping affirmed that the world shares a common destiny to tackle climate and other environmental challenges, presenting a set of thoughts to enhance the role of the G20 in this regard.

In his speech, the Chinese President said that his country announced China's initiative to scale up its nationally determined contributions and strive to peak carbon dioxide emissions by 2030 and achieve carbon neutrality by 2060.

He applauds the Kingdom of Saudi Arabia's initiative on Circular Carbon Economy and supports the shift to low-carbon energy in the post-COVID19 era.

For his part, Indian Prime Minister Narendra Modi reasserted the significance of preserving the Earth planet, protecting peoples as well as economies against the impacts of the COVID-19, in addition to concentrating on fighting the climate change in an integrated and comprehensive manner.

In his speech, the Indian Prime Minister also pointed out that "climate change must be fought not in silo’s – but in an integrated, comprehensive and

holistic way. This is the best time for further increasing research and innovation in new and sustainable technologies. We should do so with a spirit of cooperation and collaboration.”

"India is seeking to reduce the re-use of disposable plastic and expanding the forestation through reclaiming 26 million hectares of wastelands, by 2030, as well as encouraging the circular economy and betting on building the new generation of the infrastructures, such as metro-networks, sanitation, etc," he concluded.

For his part, President Donald Trump of the United States of America stressed that the US and the G20 have a tremendous opportunity to continue building towards a better environment and work together to protect the environment and promote access to clean and affordable energy.

In his speech, the US President said that "we have taken terrific steps to ensure that the United States is among the cleanest countries in air and water quality in the world."

“Together, we can protect our environment, promote access to clean, affordable energy, and deliver a future of opportunity, prosperity, and hope for our nations all over the world,” he said.