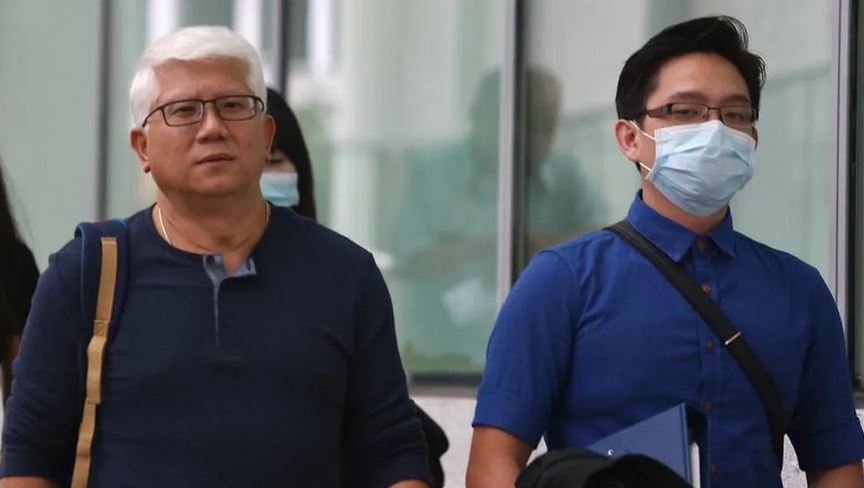 A 24-year-old man was sentenced to four years' jail on Monday (Oct 5) for beating his purported "stalker" to death in a 20-minute assault that was aided by his stepfather, with the judge declining to impose caning due to the "somewhat unique nature" of the case.

Ryan Xavier Tay Seet Choong was given the term for one charge of voluntarily causing grievous hurt. He claimed that the victim, 26-year-old Shawn Ignatius Rodrigues, had stalked him and his family for years.

Tay's stepfather, 59-year-old Lawrence Lim Peck Beng, was sentenced to eight months' jail for abetting the crime by restraining the victim, sitting on his buttocks and performing a leg lock so the victim could not extricate himself.

District Judge Tan Jen Tse said that evidence shown in the trial revealed that the victim had harassed the two offenders over two years, resulting in 59 police reports.

The two men had not actively sought Mr Rodrigues out, but only reacted when the victim harassed them at their home, said the judge, adding that the victim's "provocative behaviour serves as a strong mitigating factor".

The victim sustained fractures and died from traumatic asphyxiation after the 20-minute assault at a staircase outside the two offenders' Yishun flat in 2016.

Tay was 10 when he met the victim at a Catholic church where they were both altar boys. After Mr Rodrigues developed a "special liking" for him, Tay said he began feeling uneasy and distanced himself from the victim.

He later realised that the victim had used a photo of Tay as his WhatsApp photo and was "disgusted", leading him to leave the church. After this, Mr Rodrigues began appearing in front of his flat to talk to him, said Tay.

His stepfather said the victim harassed his family and made nuisance calls to them over the period of about two years, increasing in frequency in 2015.

On the day that Mr Rodrigues died, he had allegedly harassed the family at their flat several times until Tay pursued him and began scuffling with him. Tay's stepfather joined him soon after.

Deputy Public Prosecutor Jason Chua had asked for at least five years' jail and eight strokes of the cane for Tay, and at least a year's jail for Lim.

He pointed out aggravating factors in the case, such as the manner of assault, which lasted 20 minutes, while Mr Rodrigues was pinned to the ground by both Tay and Lim.

Tay threw "multiple blows" at the victim, said the prosecutor, adding that more than 30 distinct external injuries were found on Mr Rodrigues' body.

Tay also admitted that he wanted to teach the victim a lesson, for the alleged harassment he had caused Tay's mother and neighbour, said Mr Chua.

Mr Chua objected to the defence's calling for a probation suitability report, saying probation is inappropriate as the offence was "so grievous and harm caused so severe that clearly the option of probation should be precluded from the outset".

He said Lim's role was limited to restraining the victim, while Tay was the primary assailant.

Tay's lawyer Peter Low tried unsuccessfully to ask for a probation pre-sentencing report, saying that his client was "a very young boy" frustrated with how "nothing happened" after 59 police reports were made against the victim's allegedly harassing behaviour.

The victim had been making frequent unwanted visits to Tay's family, and the victim's mother had testified that she told her son not to go to Tay's house, said Mr Low.

"(Tay) didn't expect that there was going to be resultant death," said the lawyer. He said it would not have happened "if not for the particular circumstances of this case" and said his client should be rehabilitated.

The judge replied that for probation to be called there must be some remorse and acceptance of doing the acts, but these "seem to be absent to me".

Lim's lawyer Ang Sin Teck asked for between six and 12 months' jail, saying that the prosecution's characterisation of the victim's behaviour as just causing "some distress" to Lim was inaccurate.

"The prosecution have, I must say, downplayed the provocations of Shawn," said Mr Ang. "They have characterised it as causing just some distress to Lawrence. That could not be further than the truth."

He said the victim had made the lives of Lim, Tay and their family "a living hell" because of his "egregious conduct".

While there were good mitigating factors in both offenders' cases, the judge noted that neither of them had expressed remorse. He also said probation was not a "realistic sentencing option".

For voluntarily causing grievous hurt, Tay could have been jailed for up to 10 years and fined or caned. His stepfather faced the same penalties for abetting him.