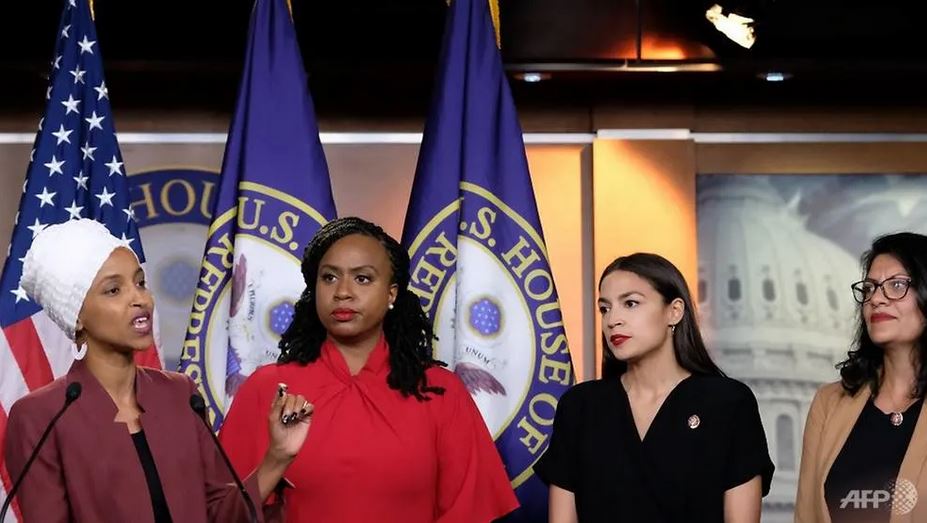 US Representatives Ilhan Omar speaks as, Ayanna Pressley, Alexandria Ocasio-Cortez and Rashida Tlaib listen during a press conference at the US Capitol on Jul 15, 2019 in Washington, DC. (AFP)
WASHINGTON - AFP

Trump under fire for attacks on Democratic congresswomen

US congresswomen targeted in remarks by Donald Trump said on Monday (Jul 15) that the president is promoting a "white nationalist agenda," and vowed they would not be "silenced."

Trump has stepped up his attacks on the four progressive Democratic congresswomen, saying if they're not happy in the United States, "they can leave," and accusing them of having "love" for US "enemies like Al-Qaeda."

"All they do is complain," Trump told reporters at a "Made in America" event featuring US-manufactured products at the White House.

"These are people that hate our country," he said. "If you're not happy here, you can leave."

Trump also accused the four Democratic congresswomen - who are of Hispanic, Arab and African-American origin - of having "love" for US "enemies like Al-Qaeda."

Asked by a reporter whether he was concerned that many people saw his comments as racist, Trump said: "It doesn't concern me because many people agree with me."

The president began his xenophobic attacks on the lawmakers with a series of tweets on Sunday, prompting outrage from Democrats - and, initially, awkward silence from Republicans.

Several hours after his remarks, the four - Alexandria Ocasio-Cortez of New York, who is of Puerto Rico origin, Ilhan Omar of Minnesota, who is of Somali origin, Rashida Tlaib of Michigan, the first Palestinian-American woman elected to Congress, and Ayanna Pressley of Massachusetts, who is African-American - hit back at a news conference.

Pressley condemned Trump's "xenophobic and bigoted" comments and said "we will not be silenced."

Omar said Trump made a "blatantly racist attack" on four lawmakers "of color." "This is the agenda of white nationalists," she said.

Omar and Tlaib repeated calls for Trump to be impeached.

On Monday, several of his party faithful began to speak up.

"My view is that what was said and what was tweeted was destructive, was demeaning, was disunifying, and frankly it was very wrong," said Senator Mitt Romney, a Republican from Utah.

"There is no excuse for the president's spiteful comments - they were absolutely unacceptable and this needs to stop," said Senator Lisa Murkowski, a Republican from Alaska. "We must demand a higher standard of decorum and decency."

Senator Susan Collins of Maine said she disagreed with the policies espoused by the "far-left" Democratic lawmakers but added that "the president's tweet that some members of Congress should go back to the 'places from which they came' was way over the line, and he should take that down."

For Republican Senator Pat Toomey of Pennsylvania, "the citizenship of all four is as valid as mine."

"They are entitled to their opinions, however misguided they may be," he added.

Will Hurd, the only black Republican in the House of Representatives, told CNN that Trump's tweets were "racist and xenophobic" and "behaviour that's unbecoming of the leader of the free world."

Senator Tim Scott, a black Republican from South Carolina, criticised Trump for using "unacceptable personal attacks and racially offensive language" while Republican Representative Mike Turner of Ohio said the remarks were "racist and he should apologise."

Trump's comments appear to be aimed at galvanising his mostly white electoral base ahead of the 2020 presidential vote - while also stoking divisions among his political opponents.

"With his deliberate, racist outburst, @realDonaldTrump wants to raise the profile of his targets, drive Dems to defend them and make them emblematic of the entire party," said David Axelrod, who served as chief strategist for Barack Obama's two White House campaigns.

"It's a cold, hard strategy," Axelrod said on Twitter. "Fasten your seatbelts, it will only get worse as the election approaches."

"If (the Democrats) want to gear their wagons around these four people, I think they're going to have a very tough election, because I don't think the people of the United States will stand for it."

In his initial Twitter attack on Sunday, Trump - who before becoming president pushed the racist "birther" conspiracy theory that Obama was not born on US soil - said the congresswomen came from corrupt, poorly managed countries to which they should return.

He did not identify the four women by name at first although on Monday, he made it clear he was referring to Ocasio-Cortez and Omar.

The attacks also appeared to target Tlaib and Pressley.

"You have somebody that comes from Somalia, which is a failed government, a failed state, who left Somalia, who ultimately came here and now is a congresswoman who's never happy," Trump said on Monday.

He accused the lawmakers of using anti-Semitic language and voicing hatred for Israel, even suggesting that they might be communists.

Nancy Pelosi, the Democratic speaker of the House of Representatives, has had a tenuous relationship with the four left-leaning first-term congresswomen but she jumped to their defence.

"When @realDonaldTrump tells four American Congresswomen to go back to their countries, he reaffirms his plan to 'Make America Great Again' has always been about making America white again," Pelosi said.

Pelosi also said she was seeking Republicans to co-sponsor a resolution in the House "condemning the president's xenophobic tweets" and "characterisation of immigrants."

Ocasio-Cortez, known as AOC, tweeted that "the President's words yday, telling four American Congresswomen of colour 'go back to your own country' is hallmark language of white supremacists.

"Trump feels comfortable leading the GOP into outright racism, and that should concern all Americans," she said.