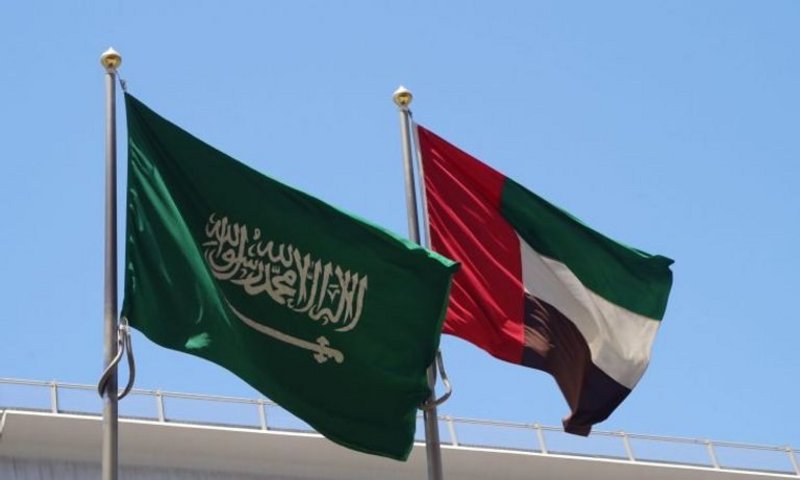 The United Arab Emirates is set to share with the Kingdom of Saudi Arabia its celebrations of the anniversary of the 91st National Day, which falls on 23rd September.
The UAE’s official and public participation in this year’s celebrations, held under the slogan "Together Forever Saudi-UAE", confirms the deep ties between the two countries.
The strong historic relations between the two countries have guaranteed the security of the region and have been an model of stability, security, prosperity and wellbeing.
The historic ties between the UAE and Saudi Arabia were officially consolidated by the efforts of the late leaders Sheikh Zayed bin Sultan Al Nahyan and King Faisal bin Abdulaziz Al Saud, who were keen to establish their coordination and cooperation.
Their bilateral ties, under the leadership of President His Highness Sheikh Khalifa bin Zayed Al Nahyan and King Salman bin Abdulaziz Al Saud, Custodian of the Two Holy Mosques, were advanced to a comprehensive strategic partnership.
Over the few past years, the two countries united their efforts and consolidated their overall bilateral integration, in light of a clear vision represented by the Al Azm (Determination) Strategy, the outcomes of the "Saudi-Emirati Coordination Council" and "Operation Decisive Storm" in Yemen.
The strong bilateral relations have helped maintain the security and stability of the region and the entire world, especially as their related efforts are full of initiatives aimed at settling Arab disputes and supporting Arab countries. Both countries have acquired significant international confidence, as their policies are characterised by wisdom and moderation when facing extremism and terrorism.
Their relations have also witnessed progress through the establishment of a joint supreme committee in May 2014 chaired by their ministers of foreign affairs, which implemented the strategic visions of their leaderships to address the challenges facing the region.
In 2016, the two countries signed an agreement to establish a joint coordination council, which holds consultations on issues of mutual concern.
In June 2018, the UAE and Saudi Arabia reinforced their bilateral ties to unprecedented levels and announced a comprehensive mutual vision of integration in economic, development and military areas, through 44 joint strategic projects under the framework of the Al Azm Strategy, with the participation of 350 officials from 139 Emirati and Saudi authorities during a period of 12 months.
Their economic and commercial partnership is also a model of cooperation and solidarity. Saudi Arabia is the leading Arab trade partner of the UAE and its third international trading partner, accounting for 7 percent of the UAE’s international non-oil trade. The two countries have the two largest Arab economies and are among the top 10 exporters in the world, with a total export size of nearly US$750 billion in 2018.
Tourism between the two countries plays a crucial role in strengthening their trade and economic relations, and is among the most promising sectors that provide investment opportunities and attract joint projects, which will diversify their economic and trade activities, primarily as the UAE has allocated large amounts of money to develop this sector in the coming decades.
Their cultural ties reflect the geographic and social connection between their peoples, reinforced through several channels, such as the education sector, with Emirati students studying in schools in Mecca, Ahsa and Riyadh, and Emirati universities and institutes receiving many Saudi students.
These cultural relations are also highlighted by many joint cultural agreements and programmes and the links between cultural institutions, academics and intellectuals from both countries, as well as their collective vision, historic relations and shared cultural, social, geographic and economic heritage.