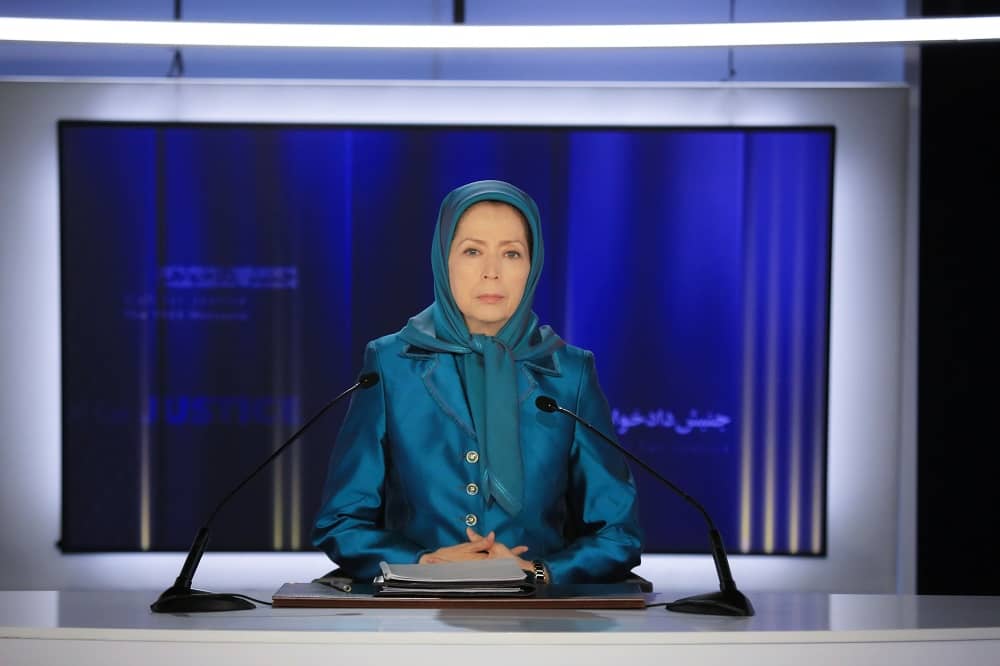 In an online conference held on Friday, August 27 between some 2000 points worldwide,  Maraym Rajavi, the President-elect of the National Council of Resistance of Iran, called on the United Nations High Commissioner for Human Rights and the Human Rights Council to establish an international fact-finding mission to investigate the 1988 massacre in Iran.

In previous months, the UN Special Rapporteur on the situation of human rights in Iran, Amnesty International, and more than 150 prominent human rights advocates have urged an independent UN inqury into the event.

Maryam Rajavi also called on the U.S. and Europe to recognize the 1988 massacre in Iran as genocide and a crime against humanity and urged them not to welcome Ebrahim Raisi (current Iranian Presidnet) in their countries.  She called on them to prosecute and hold Raisi accountable.

Ebrahim Raisi, was a member of the “death commission” in Tehran, which ordered the execution of thousands of prisoners in  1988.

In the summer of 1988, Ruhollah Khomeini, then the leader of the Iranian regime issued a fatwa (religious decree) to execute all imprisoned members of the People’s Mojahedin Organization of Iran (PMOI/MEK), who remained faithful to their cause. Some 30,000 political prisoners were subsequently executed.

“For us, the Call-for-Justice movement is synonymous with perseverance, steadfastness, and resistance to overthrow this regime and establish freedom with all our strength. For this reason, denying the massacre, minimizing the number of victims, and erasing their identities are what the regime is seeking, because they serve its interests and ultimately help preserve its rule,” Rajavi said.

“The actions of the new government of Iran are in line with the regime’s history. The new foreign minister has served under previous governments. There is no difference between conservatives and reformists. It is the same regime. This is confirmed by the foreign minister’s closeness to the commander of the Quds Force. He even confirmed that he will continue the path of Qassem Soleimani,” said Mr. Frattini.

Meanwhile, former Belgian PM Guy Verhofstadt deplored that “The 1988 massacre, planned and rigorously executed with a clear target in mind, qualifies as genocide. It was never officially investigated by the UN and the perpetrators were not indicted. They continue to enjoy impunity. Today, the regime is run by the killers of that time.”

“It is important that the EU and broader international community adopt leadership roles on this issue. The government in Iran, led by Raisi, has an even greater culpability on the issue of the 1988 massacre,” said Kumi Naidoo, former Secretary General of Amnesty International affirmed.

“Today, a murderer is ruling Iran. The Iranian parliament might have accepted him, but we will not. Iranian women will not accept him. Women are a fundamental element of the society. If we close our eyes, we will be responsible too,” affirmed Dominique Attias, President of European Bars Federation.

Geoffrey Robertson, first President of the UN Special Court for Sierra Leone, was explicit on the responsibility of the 1988 massacre: “There is no doubt that there is a case for prosecuting Ebrahim Raisi and others. There has been a crime committed that engages international responsibility. Something must be done about it as has been done against the perpetrators of the Srebrenica massacre.”

Theo Van Boven, former UN Division of Human Rights’ Director and UN Special Rapporteur on Torture also called for an independent inquiry by the United Nations into the 1988 massacre and the accountability of Raisi.

Political voices were also raised against inactivity on the part of the EU towards the grave Human Rights’ situation in Iran.

“Despite all the calls for an independent international investigation into the 1988 massacre, the European Union has ignored these calls, shown no reaction, and not been prepared to show a reaction. I would like to call on the EU to sanction the regime for crimes against humanity. I think Lithuania can take the lead among EU members,” affirmed Audronius Ažubalis, former Minister of Foreign Affairs of Lithuania and Member of the Lituanian Parliament.

A number of video-messages from people inside Iran urging international action on the 1988 massacre were also broadcast, as sign of solidarity inside Iran as well as abroad.

Some 1,000 former political prisoners, some of whom are survivors of the 1988 massacre, also took part in the conference. They gave shocking testimonies of what they had experienced inside the mullahs’ prisons.