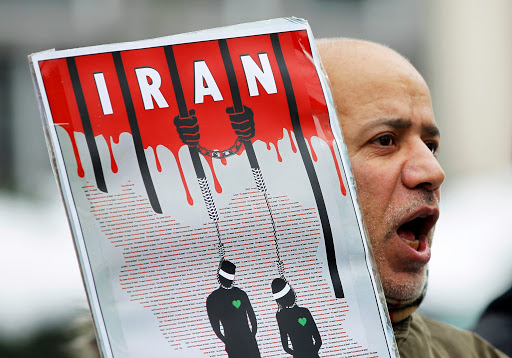 Impunity fuels the death machine of the Iranian regime

Less than three months have passed since the execution of Navid Afkari. His execution sparked a global outcry, and many governments and personalities, especially renowned athletes, expressed disgust at his innocent execution. But at least 10 others have been executed since Navid was executed.

This number only includes those whose names have been officially announced. The latest execution by the Iranian regime is the execution of a young man who was only 16 years old at the time of his arrest.

On the eve of the new year Thursday morning, December 31, 2020, the clerical regime hanged Mohammad Hassan Rezaiee in Rasht Prison. Rezaiee was 16 years old at the time of his arrest and the alleged crime. He had served more than 13 years in prison. After being arrested in 2007, Rezaiee, under torture and pressure, including long solitary confinement, was forced to confess. And during his trial in 2008, he said that his confessions had been made under torture. Iran holds the world record for child executions and per capita executions. 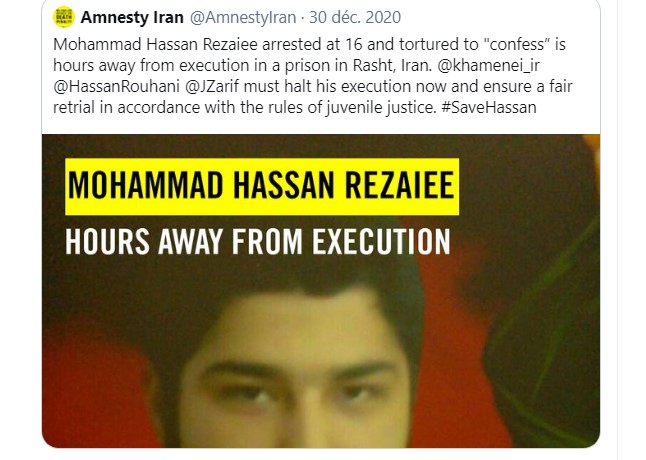 On Thursday, December 31, 2020, the mullahs' regime hanged also three Sunni prisoners, Hamid Rastbala, Kabir Sa'adat Jahani, and Mohammad Ali Arayesh, on the charge of being "outlaws" in Vakil-Abab Prison in Mashhad, northeast Iran. They had endured five-and-a-half years of imprisonment and torture.

The head of Iran's judiciary, Ebrahim Raisi, has been involved in the 1988 massacre of 30,000 political prisoners in Iran. He was a member of the Death Commission. The death commission consisted of three or four people in each city and province to determine whether or not the prisoners had maintained their ideological stand and opposition to the Khomeini regime, and their loyalty to the MEK, the sworn opposition to the regime.

Amnesty International has compiled evidence of the involvement of several individuals who continue to hold high positions of power in the enforced disappearances and extrajudicial executions including: the current head of the judiciary, Ebrahim Raisi; the current minister of justice, Alireza Avaei; the former minister of justice and current advisor to the head of the judiciary, Mostafa Pour Mohammadi; the head of the Supreme Disciplinary Court for Judges, Hossein Ali Nayyeri.

The Iranian regime never paid a price for this massacre. Amnesty International refers to it as a massacre with impunity. It is very clear that as long as the highest judicial authorities of a country are involved in the killing, expectation of a halt to executions is futile.

On the other hand, the Iranian regime has never paid a price for its executions inside the country or its assassinations and hostage taking as a tool of diplomacy abroad. And that is why it never abandons these inhuman tools to stay in power.

If the Iranian regime had to pay the price of assassination of its opponents or kidnappings abroad, such as Ruhollah Zam, or assassination of dissidents in Berlin, Switzerland and Paris, and European countries would not have succumbed to the blackmail of the Iranian regime, for instance by cutting off diplomatic relations, the regime could never have carried out an open-handed bomb plot on an Iranian opposition rally on the outskirts of Paris in 2018 with the help of a sitting diplomat, possibly creating a catastrophe greater than that of the Bataclan in Paris. And then when the same diplomat accused of bombing is brought to justice in Belgium, he threatens the court that if he is convicted, pro-Iranian regime groups in Belgium will set Belgium on fire. This arrogance is only because the regime knows that it does not pay a price. If European countries made their trade with Iran conditional on the cessation of executions in Iran and did not prioritize money over blood, the Iranian regime would undoubtedly be forced to stop the execution of at least juveniles. Impunity has always been the fuel for the Iranian regime's death machine.