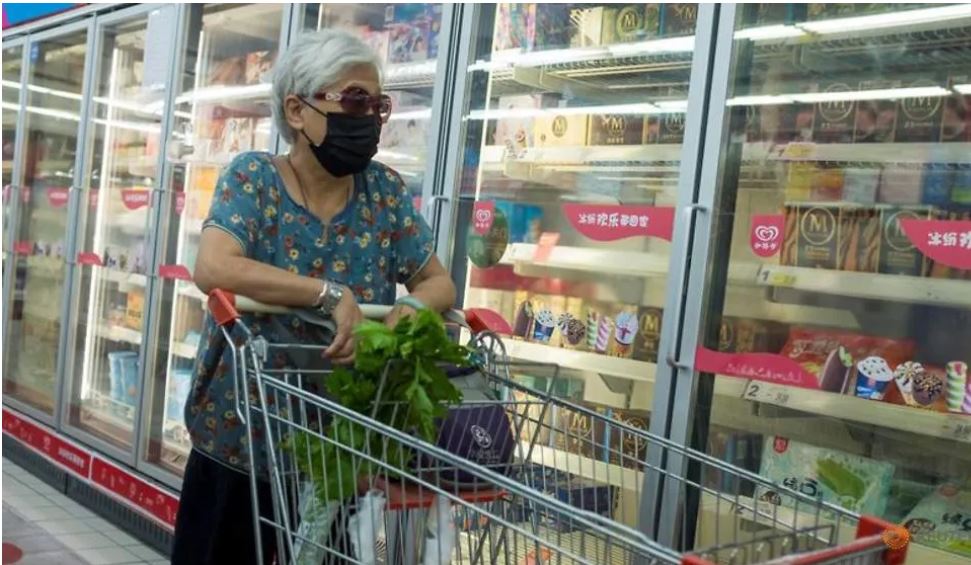 A woman looks at frozen food products in a supermarket following an outbreak of the coronavirus disease (COVID-19) in Beijing, China, August 13, 2020. (Photo: Reuters/Thomas Peter)
By Katherine J Wu (The New York Times)

NEW YORK: Amid a flurry of concern over reports that frozen chicken wings imported to China from Brazil had tested positive for COVID-19, experts said Thursday (Aug 13) that the likelihood of catching the virus from food — especially frozen, packaged food — is exceedingly low.

“This means somebody probably handled those chicken wings who might have had the virus,” said Angela Rasmussen, a virologist at Columbia University.

“But it doesn’t mean, ‘Oh my God, nobody buy any chicken wings because they’re contaminated.’”

Guidelines from the Centers for Disease Control and Prevention maintain that “there is no evidence to suggest that handling food or consuming food is associated with COVID-19".

The main route the virus is known to take from person to person is through spray from sneezing, coughing, speaking or even breathing.

“I make no connection between this and any fear that this is the cause of any long-distance transmission events,” said C Brandon Ogbunu, a disease ecologist at Yale University.

When the virus crosses international boundaries, it’s almost certainly chauffeured by people, rather than the commercial products they ship.

The chicken wings were screened on Wednesday in Shenzhen’s Longgang district, where officials have been testing imports for the presence of coronavirus genetic material, or RNA.

Several samples taken from the outer packaging of frozen seafood, some of which had been shipped in from Ecuador, recently tested positive for virus RNA in China’s Anhui, Shaanxi and Shandong provinces as well.

Laboratory procedures that search for RNA also form the basis of most of the coronavirus tests performed in people. But RNA is only a proxy for the presence of the virus, which can leave behind bits of its genetic material even after it has been destroyed, Ogbunu said.

“This is just detecting the signature that the virus has been there at some point,” he said.

To prove that dangerous, viable virus persists on food or packaging, researchers would need to isolate the microbe and show in a lab that it can still replicate.

These experiments are logistically challenging and require specially trained personnel, and aren’t a part of the typical testing pipeline.

After samples taken from the surface of the meat came up positive, officials performed similar tests on several people whom they suspected had come into contact with the product. They also tested a slew of other packaged goods.

All samples analyzed so far have been negative for coronavirus RNA, according to a statement released by the Shenzhen Epidemic Prevention and Control Headquarters Office.

But the same statement cautioned consumers about imported frozen products, and early reports of the news sparked alarm on social media.

Both Ogbunu and Rasmussen said that an extraordinarily unusual series of events would need to occur for the virus to be transmitted via a frozen meat product. Depending on where the virus originated, it would need to endure a potentially cross-continental journey in a frozen state — likely melting and refreezing at least once along the way — then find its way onto someone’s bare hands, en route to the nose or mouth.

Even more unlikely is the scenario that a virus could linger on food after being heated, survive being swallowed into the ultra-acidic human digestive tract, then set up shop in the airway.

“The risks of that happening are incredibly small,” Rasmussen said.

Some viruses might be able to weather such an onerous pilgrimage. But the coronavirus probably isn’t one of them because it’s a so-called enveloped virus, shrouded in a fragile outer shell that’s vulnerable to all sorts of environmental disturbances, including extreme changes in temperature.

Viruses are often frozen in laboratories that maintain stocks of pathogens for experiments. But virologists must monitor that process carefully to avoid destroying the vulnerable bugs.

“The act of freezing and unfreezing is a kind of violent thermodynamic process,” Ogbunu said.

"A virus, for all its toughness and robustness, is a very delicate instrument of infection.

"The CDC has noted that “it is possible” that the coronavirus can spread through contaminated surfaces, including food or food packaging. But that’s not known to be among the main ways the virus gets around.

If you don’t want to get infected, avoiding direct contact with other people is probably a better use of your time, Ogbunu said.

“Yes, we should continue to wash our hands and be mindful of surfaces where a lot of individuals are,” he said. “But it’s close proximity to others that can really facilitate transmission.”