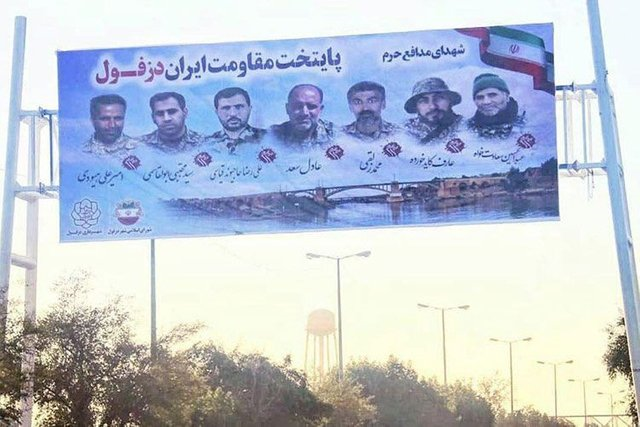 Iran: youths expressing their anger against interference in Syria.

While The Trump administration is using the former embassy of Iran as the newest background for its campaign to isolate the Iranian regime.

And a highly produced video recorded by the State Department outside the old embassy in Washington In which the Special Representative for Iran, Brian hook says: The U.S. has taken good care of Iran’s embassy in Washington, hoping that one day we can return the keys back to an Iranian government that cares more about its people and less about its destructive revolutionary ideology. A brighter future is possible.

On Tuesday, February 19, 2019, the population of the city of Andimeshk, in the province of Khouzistan (southwestern Iran) ripped off a banner supporting Iran's interference in Syria, hanging on a giant sign at the entrance to the city, Iranian social media reported.

The hanging of this banner by the Dezful Town Hall in the intersection with the city of Andimeshk was the cause of a revolt by the population of the latter who did not appreciate that the authorities of the neighboring city came to hang a propaganda sign in their city. The intersection in question has been the subject of a membership dispute between the two cities for a long time.

The fact that the banner has a propaganda content in favor of Iran's interference in Syria has further angered the people of Andimeshk who have had clashes with the police. The latter used tear gas and live ammunition in the air on several occasions to disperse the crowd.

The angry demonstrators finally ripped off the banner in question. The special representative of Supreme Leader Ali Khamenei in the city of Dezful expressed outrage at this act of anger and described the demonstrators as "thugs".

"This kind of action prepares the way for the enemy, to generate insecurity in society. It benefits anti-revolutionaries who abuse the situation," added Mohammad Ali Ghazi, who acknowledged that the action was an act of opposition to the ruling government.

In the meantime, the PMOI/MEK resistance unit network escalating the anti-regime effort

In Khorramabad, western Iran, members of a resistance unit set fire to the entrance of a building belonging to the Revolutionary Guards (IRGC) Basij paramilitary units.

Members of another resistance unit in Shahr-e Rey, southern Tehran also set fire to an IRGC Basij headquarters, raising the level of their measures and directly targeting the regime’s oppressive units.

In Mashhad, northeast Iran, members of Resistance Unit 905 set fire to the entrance of an IRGC Basij base, inflicting fear in the ranks and files of the local regime units.

Again in Khorramabad, members of Resistance Unit 380, set fire to a billboard outside an IRGC Basij base.