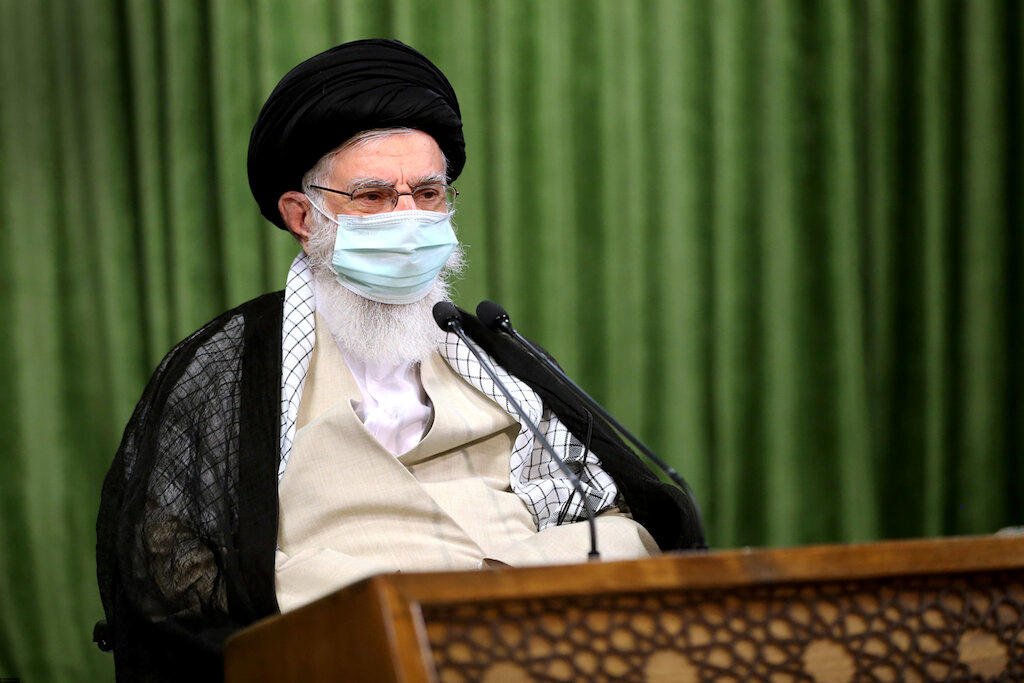 In his speech on Friday, January 8, 2021, the Supreme Leader of the Islamic Republic of Iran, Ali Khamenei, pointed to a few matters’ worth elaborating on. Throughout his speech, he made it clear that in Iran, the foremost decision-making authority is himself and the government, the president, and the parliament are not allowed to decide on major issues. In other words, the people's will and whatever other officials may express are unimportant to him. Listening to his speech, one would clearly comprehend that Iran is, in fact, a dictatorial country ruled by a dictator named Ali Khamenei and that other government agencies have virtually no power to make important decisions.

But one of the important points that Khamenei addressed in his speech was the possible purchase of the Corona vaccine from American and British companies. Last week, a massive campaign #buy vaccine was launched by the Iranian people on social media platforms. Khamenei called the vaccines from the United States and Britain unreliable and not trustworthy for ridiculous reasons. Khamenei's unscientific and dangerous assumptions contradict the World Health Organization and almost all countries of the world that have approved the use of these vaccines in their countries. In his speech, Khamenei stated:

"Allowing the American and British vaccines into the country is prohibited. I also told this to the Iranian government officials, and I will say it publicly now". He said the vaccines should not be bought. In other words, it does not matter to him that thousands of Iranians will lose their lives because of the unavailability of the vaccines. He encouraged people to wait for the vaccine that is supposed to be produced in Iran.

He intentionally did not mention in his speech that in the most optimistic case, it will take at least one year to avail the vaccine to the people. Khamenei's decision to disallow the import and use of the Corona vaccine into Iran indicates that contrary to the regime's rhetoric and propaganda, Iran was never sanctioned on food and medicine and the Iranian authority's claims that because of sanctions, Iran was unable to import the vaccines.

Another important point that Khamenei mentioned in his speech was the issue of the US sanctions. While calling for the immediate lifting of sanctions by the United States, he explicitly confirmed that Iran no longer adheres to some of its JCPOA obligations, including enriching 20% uranium. He stressed if other countries do not implement their shares of JCPOA, Iran will not either.

Of course, the actions of the Iranian regime over the past year, the start of 20% Uranium enrichment, and expressing its intentions for higher Uranium enrichment prove that Iran has never given up on its desire to build an atomic bomb. Khamenei intends to exploit the transition of power in the United States by blackmailing and extorting, forcing foreign parties to lift sanctions, renounce Iran's missile programs and export of terrorism and the regime's criminal interventions in the region.

In his speech, Khamenei intends to pressure Biden to lift the sanctions as soon as possible; otherwise, Iran will no longer abide by the JPCOA agreement and will enrich uranium with high percentages, which is used to build nuclear weapons and blame the American president. He also pointed out that the United States' return to JPCOA is not important for Iran, and he only demands the lifting of sanctions by the United States. It is clear that Biden will not rejoin the old JPCOA and will want a new agreement to be discussed.

In addition to the nuclear issue, the new agreement will address other topics such as the regime's provocative interventions in the region and support for terrorist groups in Iraq, Lebanon, Yemen and Syria, and Iran's expansion of missile power. Khamenei also referred to these two issues and said, "First of all, Iran has a duty to act in such a way that its friends and supporters in the region are strengthened, it is our duty. Our presence in the region means strengthening our friends and strengthening our supporters. We should not weaken the friends of the Islamic Republic and those loyal to the regime. So, this is a definite regional presence that must exist and will exist. ». This means that Iran will continue to spend a large portion of its budget on helping proxy groups in other countries, despite the dire internal economic situation and the Iranian people's dissatisfaction. It is worth mentioning that the majority of the Iranian people live below the poverty line. This of course will continue destabilizing the region.

Regarding the Iranian missile program, Khamenei said, "Today, our defense power is such that our enemies have to take into account Iran's capabilities in their calculations." "We must not leave our country defenseless; it is our duty; we must not bow to the enemy's demands." In his speech, Khamenei also talked about Iran's next presidential election that is scheduled to be held in June 2021. Khamenei is pursuing a contractionary policy. He has installed two of his close associates as head of the Judiciary and the parliament's head. Khamenei is considering making sure the next president and his ministers are also completely aligned with his policies. To this end, in his speeches, he referred to his preference for a radical government modelled by Qassem Soleimani, former commander of the Quds terrorist force. It should be noted that after raising this issue, several Revolutionary Guards commanders have prepared themselves to participate in the showy presidential elections. Thus, Khamenei wants to seize all the levers of power and government and eliminate any possible opposition to him and his decisions. However, given the dire economic/social situation in Iran and the corruption in the government apparatus, which has caused dissatisfaction among more than 90% of the people, it remains to be seen whether Khamenei's plans can save his government and prevent its overthrow by popular uprisings. We have seen it in previous years, especially in the November 2019 uprising. This is something that will be answered in the coming months.