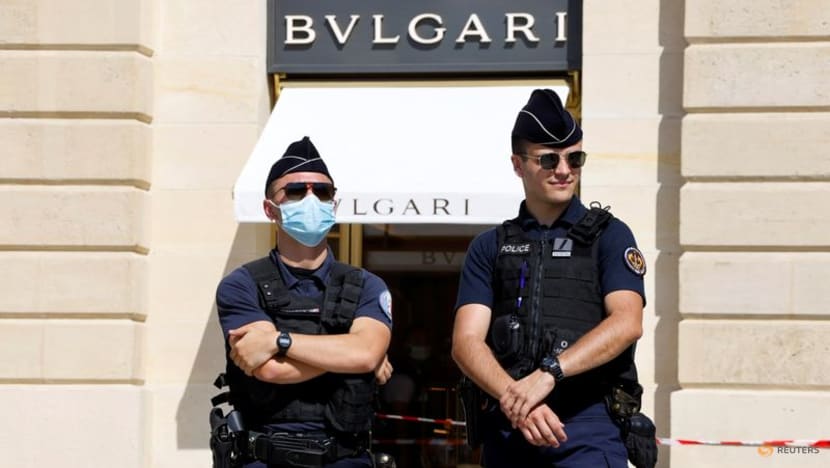 Armed robbers targeted a luxury jewellery store near the Ritz Hotel on the opulent Place Vendome in Paris on Tuesday (Sep 7), police in the French capital said.

Two suspects were arrested as they fled, police said. Local media said a manhunt for several accomplices was underway.

Police cordoned off the street outside the recently revamped Bulgari store on the square in central Paris and numerous police could be seen going into the boutique shortly after the robbery.

Police declined to confirm Bulgari was the target of the robbery. A representative for Bulgari, which is owned by Bernard Arnault's LVMH, could not comment immediately.

Jewellery stores in Paris have suffered a spate of armed robberies in recent months. Crime and security are likely to feature heavily among voters' main concerns in the 2022 presidential election.

In July, a Chaumet jewellery store near the Champs-Elysees was hit with almost 2 million euros (US$2.4 million) worth of goods stolen, although the loot was later recovered and the suspects arrested.

Police were alerted to the latest heist at about midday and took chase after suspects riding on two motorised scooters and in a car. The three suspects in the car were forced to abandon the vehicle and flee on foot, a police source said.

One suspect was shot in the leg before being apprehended. A second was hunted down in a car park a short distance away.

The Bulgari store recently underwent extensive renovations, in which it was expanded to have an opening on Place Vendome, and outfitted with marble columns evoking its Rome origins.

The historic Place Vendome is seen as the heart of French luxury. Labels including Chanel, Kering-owned Boucheron and Richemont’s Van Cleef & Arpels have invested considerably in their prestigious flagships lining the square.