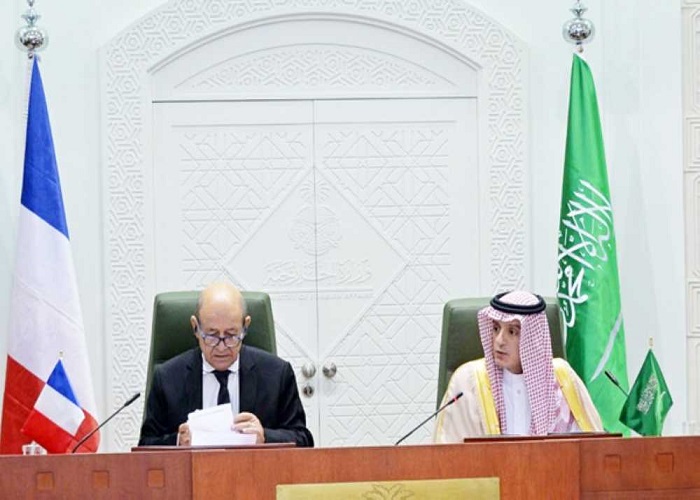 Adel bin Ahmad Al-Jubeir, Minister of Foreign Affairs, affirmed that the Kingdom of Saudi Arabia and France have enjoyed an extended relationship since more than 100 years, pointing out identical of views regarding challenges in the region, including the Palestinian Cause, Lebanon, Syria, Iraq, Yemen and Iranian interference in the region in addition to confronting terrorism and extremism. Al-Jubeir stressed that the two countries' desire to rise and intensify the level of the relations in all fields.
This came during a press conference held here today by Minister of Foreign Affairs with his French counterpart Jean-Yves Le Drian, where Al-Jubeir welcomed the French minister who is currently visiting the Kingdom.
Al-Jubeir highlighted the meetings of the Custodian of the Two Holy Mosques King Salman bin Abdulaziz Al Saud and Crown Prince Mohammed bin Salman bin Abdulaziz, Deputy Prime Minister and Minister of Defense, with the French Foreign Minister, describing them as positive and constructive meetings reflecting the historical and strategic relations between the two friendly countries.
Al-Jubeir pointed out to his talks with his French counterpart in addition to consensus of views of the two countries towards the issues in the region.
Foreign Minister Al-Jubeir appreciated France's stance towards targeting Riyadh City with a ballistic missile launched by Houthi militia with the support of Hezbollah. He also appreciated France's stance towards supporting Lebanon as well as stability in Syria, in addition to seeking a solution in Yemen based on UN Security Council Resolution No. 2216, Gulf initiative and the outcomes of the national dialogue.
For his part, French Foreign Minister Jean-Yves Le Drian said that his visit to the Kingdom of Saudi Arabia comes within the framework of an old and solid partnership, stressing his country's determination to strengthen this partnership in the future.
The French minister highlighted his meeting with the Custodian of the Two Holy Mosques and the Crown Prince, as well as the meeting with Foreign Minister Al-Jubeir, stressing that the views of the two countries are identical on several issues. He also stressed France's keenness on the stability and sovereignty of Lebanon.
The French minister pointed out that the humanitarian situation in Yemen was discussed in addition to the measures that must be taken to deliver humanitarian aid to the Yemeni people. He also pointed out that regional crises were reviewed and efforts to contribute to resolving them were discussed, especially the situation in Syria and Iraq.
He also said that Iran's role and actions were addressed, especially its interference in regional crises and its ballistic program.
With regard to the resigned Lebanese Prime Minister Saad Hariri, the French Foreign Minister disclosed that he will meet later with Hariri today, pointing out that French President Emmanuel Macron invited Hariri to visit France.
For his part, Al-Jubeir pointed out that Hariri lives in the Kingdom of his own choice, adding Hariri's return to Lebanon will be decided by his own wish and his own assessment of the security situations there.
With regard to the Syrian opposition's meeting in the Kingdom, the Saudi Foreign Minister said that the meeting will be held on 22-24, November, 2017 aiming to convergence of views among the parties and platforms to come out with a unified vision regarding negotiations, implementation of the "Geneva Declaration 1" and the Security Council resolution no. 2254, so that the UN envoy de Mistura can resume the negotiations in Geneva. "This is what the Kingdom is seeking," Al-Jubeir confirmed, pointing out that the invitations are being made to the Syrian brothers.
On cessation of attacks in Syria, the French Foreign Minister stressed the importance of preparing a political solution in Syria that respects the safety of the entire Syrian territory and respects the various components of the Syrian people.
Commenting on allegations that Hariri is detained in the Kingdom of Saudi Arabia, Al-Jubeir confirmed that "these allegations were false and baseless. Prime Minister Hariri is a Saudi citizen as well as a Lebanese citizen. He visits the Kingdom and lives in the Kingdom of his own choice. He can leave the Kingdom when he wants," Al-Jubeir said.
On the current Lebanese crisis, Foreign Minister Adel Al-Jubeir stressed that the basis of the crisis in Lebanon is Hezbollah, where the party kidnapped the Lebanese regime and tried to impose its authority and influence on Lebanon and impede the political process.
"Hezbollah is a tool at the hands of the Iranian Revolutionary Guards. This party is also used in the riots in Bahrain," Al-Jubeir added, pointing out that if Lebanon is able to refute the role of Hezbollah, it will be fine, but if this approach continues, instability will continue and make the situation dangerous in Lebanon.
He stressed that there is consensus in the world that Hezbollah must deal with it by one means or another.
"There is consensus or near consensus that Hezbollah is a terrorist organization of the highest order. It must respect the laws and the sovereignty of Lebanon and the Taif Accord and must disarm," Al-Jubeir concluded.