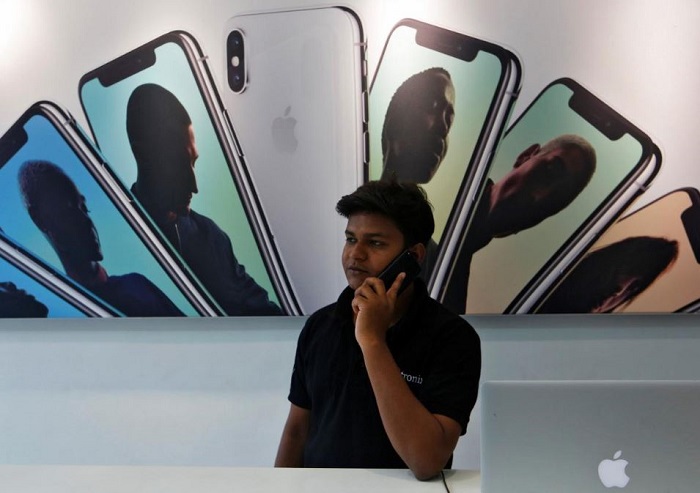 Shares in Apple Inc (AAPL.O) fell 6 percent on Friday, cutting its market value back to less than $1 trillion after it forecast softer-than-expected sales for the holiday quarter and fueled nerves over iPhone sales by saying it would no longer release the figures.
The dip in Apple’s shares to $208.50 knocked around $67 billion off its value, and put Amazon and Microsoft Corp (MSFT.O) back in the mix in the race among the United States’ big tech players to be the world’s most valuable company.
The Cupertino, California-based company blamed weakness in emerging markets and foreign exchange costs for a disappointing forecast for sales in the run-up to Christmas that are crucial to results for consumer electronics producers.
Most analysts were still upbeat on fourth-quarter results, and there was no obvious fallout for rest of the FAANG group of major U.S. tech stocks. Shares in Facebook Inc (FB.O), Amazon.com Inc (AMZN.O), Netflix Inc (NFLX.O) and Google-owner Alphabet Inc (GOOGL.O) all rose on a generally buoyant Wall Street.
Eight brokerages cut their price targets for Apple, but only one - Bank of America Merrill Lynch - cut its rating on the stock, to neutral from buy.
“Time for investors to adjust to the new disclosures,” analysts from the brokerage said. “Although the long term opportunity is significant, we expect near term pressure on shares.”
The move announced on Thursday to stop reporting unit sales data for iPhones, iPad and Mac computer products was widely criticized, with some arguing it meant Apple expected sales of iPhones have now peaked.
“While the company believes units are a less relevant metric, we strongly disagree – particularly since we believe iPhone units will begin to decline y/y as a result of higher average selling prices,” Raymond James analysts said.
Apple shares were down 6.4 pct at $208.05 before the bell.
Apple’s iPhone sales are set to dip by around a quarter in India’s holiday season fourth quarter, putting them on course for the first full-year fall in four years, industry research firm Counterpoint said on Saturday.
The Cupertino, California company’s struggle to break through with India’s 1.3 billion consumers swung more sharply into focus this week after Apple blamed a disappointing set of sales forecasts on a handful of big emerging markets.
Chief Executive Tim Cook said after publishing third quarter results that sales were flat in India in the fourth quarter, which includes a month-long festive season culminating this week in Diwali - a bumper period for electronics sales.
Neil Shah, research director at HongKong-based Counterpoint Research, said on Saturday its channel checks pointed to numbers for the quarter in the range of 700,000 to 800,000 units, down from about a million a year ago.
For the whole of 2018, Apple was set to sell about  2 million phones - a drop of about a million from last year, he said, as Indians baulk at high prices for the devices, driven by trade tariffs and a weak rupee.
“Sales are set to drop for the first time in four years,” Shah said. “If you look at Q3 - it was 900k last year and this (year) is almost 450k.
“Iphones have gone costlier and the features and specs aren’t that compelling. The install base of android has grown vastly; the new customer base (for Apple) is not coming.”
Cook on Thursday called the company’s problems in India “speed bumps along a very long journey” and most analysts say that the prestige of Apple’s brand should allow it to claim back lost ground as Indians’ spending power continues to grow.
Shah said that, while more than half the phones sold this year were older iPhone models, high selling prices meant Apple’s Indian revenue should still be flat or slightly higher than a year ago.