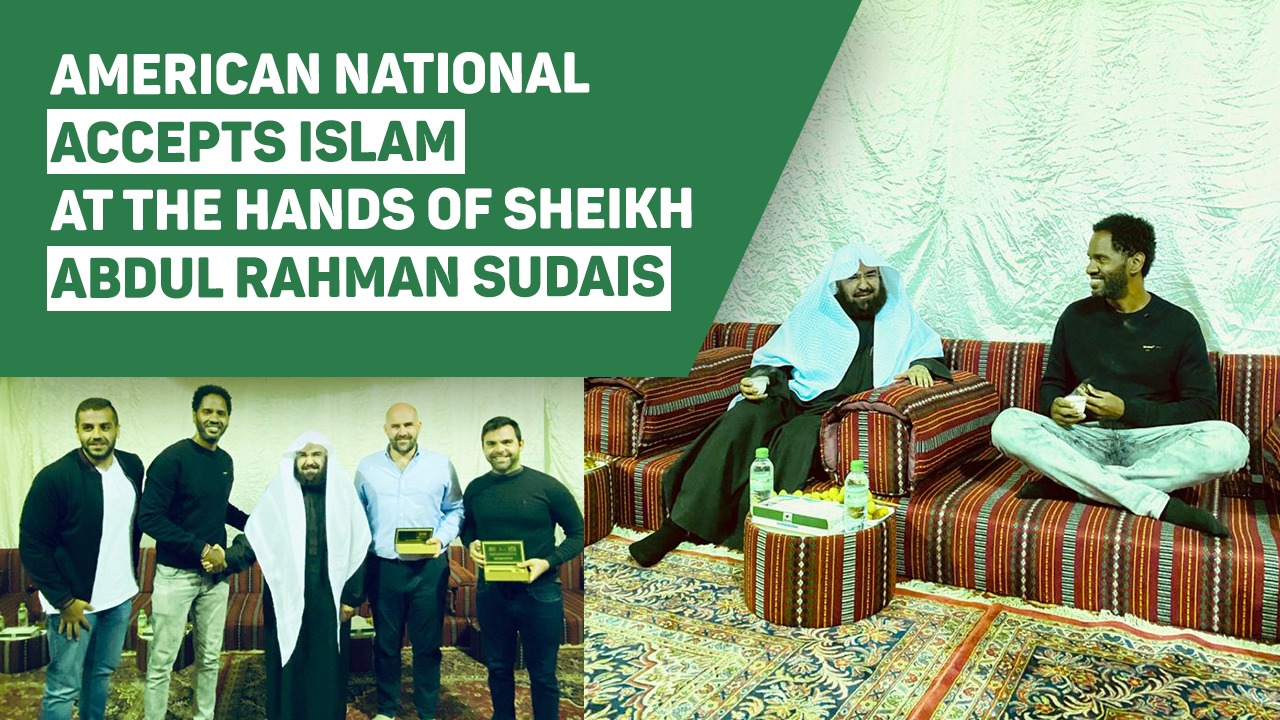 An American National accepts Islam at the hands Sheikh Al-Sudais

Steve, an American tourist, embraced Islam at the hands of Sheikh Dr. Abdur-Rahman Al-Sudais, Chief of the General Presidency for the Affairs of the Grand Mosque in Makkah and Majid Nabawi in Madina .

Steve pronounced his Shahadah (testimony of accepting Islam) before Sheikh Sudais recently and expressed his immense joy and gratitude for his new found faith. He profusely thanked and expressed his gratitude towards Sheikh Sudais, who in turn praised the Almighty Allah for opening Steve's heart, and enabling him to accept the true religion of God.

Sheikh Sudais further said that Steve "was now his brother in Islam" adding that what casted a lasting impression on Steve's mind was the purity of Islam and it's sublime teachings of the Oneness of God. Additionally, he described how Steve was extremely impressed with the level of tolerance and peaceful coexistence amongst those of different faiths within the Kingdom. The key factors that stood out for Steve during his visit were the Islamic teachings of good neighborliness and Saudi hospitality.

Steve, who works in the tourism sector in Miami, was visiting Abha alongside some of his closest friends. Providentially, and as if as pre-destined, Steve lived in the same neighborhood as Sheikh Sudais, who at the time was also spending some days in Abha. It was Saad Al-Matrafi, Sheikh Sudais' translator, who met with Steve and gave him Zamzam and dates as a gift from Sheikh Sudais.

Al-Matrafi said that Steve showed keen interest in knowing more about Islam and kept reading books about the Islamic teachings. He also briefed Sheikh Sudais about his tête-à-tête with the American tourist and Sheikh Al-Sudais was so impressed that he requested to meet with his American neighbor. During his discourse with Steve, Sh Sudais referred to several Qur'anic verses and Prophetic narrations that enjoined Muslims to be good to their neighbors and the rights they have over each other. He specifically mentioned the story of Prophet Muhammad (peace be upon him) and the Jewish lady;

Our beloved Prophet(peace be upon him) had a Jewish neighbor who used to throw garbage at him. Instead of reacting with anger, Prophet Muhammad (peace be upon him) showed kindness. When the Prophet learned one day that the neighbor was sick, he went to visit/care for that neighbor. This is an invaluable life lesson for all of us on the rights of our neighbors.

As we continued talking to Steve regarding his journey to Islam, it quickly became very clear the level of joy and happiness that beamed on his face, upon accepting Islam and pronouncing the Shahadah. He mentioned that "the Islamic teachings of fairness, tolerance, compassion, and mercy impressed him a lot". To add, he expressed his immense gratitude and appreciation for the kindness and hospitality he found with the Saudi people, describing them as "simple" and caring". In an array of emotions he continued to share his experience and said he felt like he was with his own family, his own "brothers". Steve, who was visiting the Kingdom for leisure purposes and in his own words to "explore the beauty spread over the length and breadth of the whole country" stated that he was curious to know about the birthplace of Islam and the major development and progress of the country's 2030 Vision.

Al-Matrafi who also played a major role in leading Steve to accept Islam by the permission of Allah, shared his encounter;

As soon as Sheikh Sudais arrived at his lodging in Abha, he inquired about his neighbor. On inquiries, I found out that our neighbor was an American national, Sheikh Sudais suggested sending some Zamzam, Arabic coffee, and dates to him as a gift. The initiative surprised Steve and he asked what was the reasoning for the gifts? Al-Matrafi explained to him that Islam teaches good conduct and kindness towards one's neighbor. Moreover, Al-Matrafi said during his several meetings with Steve he found out that the American national had previously read extensively about Islam and Muslims. As his relations with Steve continued and during one of their morning walks in a nearby park they discussed Islam and the parameters it sets around all worldly affairs.

The next morning Steve informed Al-Matrafi that he spent much of the night thinking about Islam and decided that he was ready to accept Islam as his faith, after three years of studying the religion Upon hearing this, Al-Matrafi was elated with joy and suggested that he takes the Shahadah in the presence of Sheikh Sudais, to which he immediately agreed. Al-Matrafi then took him to Sheikh Sudais who said the words of the Shahadah and Steve repeated after him. Later, Sheikh Sudais gave instructions to host Steve to perform Umrah in Makkah and to visit the Prophet's Mosque in Madinah as well.

"Steve was so overwhelmed with joy that he could not hold back his tears," Al-Matrafi.