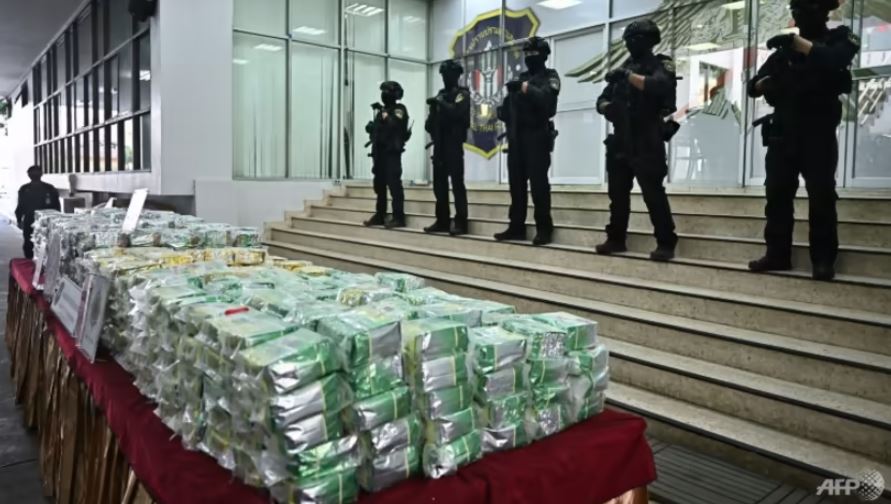 Thai police have seized 1.1 tonnes of crystal meth as the kingdom cracks down on smuggling. (Photo: AFP/Lillian SUWANRUMPHA)
BANGKOK - AFP

Thai police seize 1.1 tonnes of crystal meth in under a week

Thai police seized 1.1 tonnes of crystal methamphetamine in less than a week, officers said Tuesday (Jan 24), as the kingdom cracks down on smuggling that has surged since the country's borders reopened.

The haul comes after a spike in clashes between police and smugglers in the kingdom's remote northern hinterlands, long a hub for the trade in illegal narcotics.

Following a tip-off, police arrested 10 Thai nationals in a series of raids in the north and south of the kingdom.

"Some of these drugs were kept for a period of time before being transported to the southernmost provinces, and they were supposed to be shipped to other countries later," said Police General Chinnapat Sarasin, Deputy National Police Chief.

He said Thailand was "surrounded by drugs manufacturing hotspots", but that the COVID-19 pandemic had prevented smugglers from moving their wares.

"Now that the country has been reopened, the pent-up products are just being shipped in non-stop," he said.

Police said in a statement that a transnational drugs gang was behind the illicit trade.

In the first operation, officers found 731kg of crystal meth, also known by the street name "ice", in two raids in the southern Thai provinces of Phatthalung and Surat Thani.

Following a tip-off, officers arrested three men Thursday after they discovered 688kg of crystal meth in three pick-up trucks, which they believe was smuggled into Thailand's northeast before being transported south.

Police later arrested four more people after finding 43kg of the drug, which was being sold via the popular Thai messaging app LINE.

On Sunday, another man was arrested in northern Chiang Rai province as he prepared to transport roughly 300kg of ice - hidden in tea bags - south to Satun.

Finally, around 114kg were confiscated in central Nakhon Sawan and Patum Thani provinces, after the drugs were found hidden in coffee bag packages. Two men were arrested.

Southeast Asia is awash with meth, and authorities netted a record billion pills across the Asian region in 2021, according to a United Nations report.