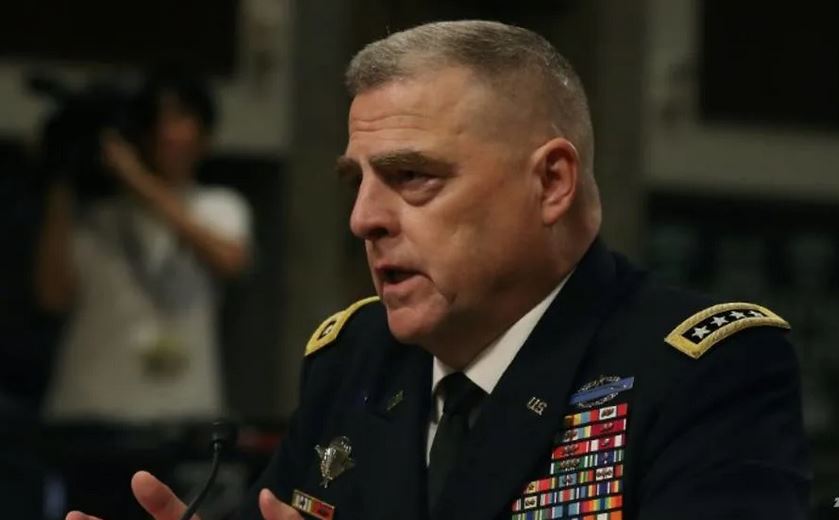 US Army General Mark Milley told the Senate Armed Services Committee that the US is discussing with allies a naval escort operation for oil tankers in the Gulf amid threats from Iran. (AFP/MARK WILSON)
WASHINGTON - AFP

The Pentagon said on Thursday (Jul 11) it was discussing military escorts for vessels in the Gulf one day after armed Iranian boats threatened a British oil tanker.

The White House's nominee to become chairman of the Joint Chiefs of Staff, General Mark Milley, said Washington was attempting to put together a coalition "in terms of providing military escort, naval escort to commercial shipping."

"I think that that will be developing over the next couple weeks," Milley told the Senate Armed Services Committee.

Tensions in the Gulf have increased in the past few weeks, with Iran's economy in free fall following the re-imposition of US sanctions after President Donald Trump pulled out from a 2015 international agreement to curb Iran's nuclear program.

The rapid chain of events further complicates Britain and other European allies' efforts to salvage the 2015 JCPOA nuclear agreement despite the US withdrawal.

Milley's statement came after London accused Tehran on Thursday of deploying three military vessels to "impede the passage" of a 274-metre BP tanker, the British Heritage.

"We are concerned by this action and continue to urge the Iranian authorities to de-escalate the situation in the region," a Downing Street spokesman said.

Iran's menacing of the BP supertanker on Wednesday appeared to be in retaliation for Britain's seizure of the Iranian Grace 1 tanker off Gibraltar on Jul 4.

Iran's Revolutionary Guards denied involvement in the British Heritage incident but said the United States and Britain would "strongly regret" British detention of the fully-loaded Iranian tanker off Gibraltar for violating sanctions on Syria, allegedly the planned recipient of its cargo.

Washington and Riyadh previously blamed Iran for allegedly using limpet mines to blow holes in Gulf-area ships in May and June, and Trump came close to ordering an attack on Iran in retaliation.

Officials in Britain and France would not confirm the discussions on a tanker escort operation.

Both, like the United States, maintain a constant naval presence in the Gulf.

But London and Paris have been reticent to join in Washington's "maximum pressure" campaign against Iran to force it to pull back on its involvement in conflicts in Syria, Iraq and Yemen.

British media reported that the possible deployment of more Royal Navy ships to the region was "being looked at" in the aftermath of the newest incident.

But in France, a government official told AFP that they were not planning for the moment to expand their presence in the Gulf.

"France is on a course of deescalation," the official said.

"Sending additional military assets to the region does not seem useful to us."

A joint effort would reprise the 1987-1988 US-led operation to protect Kuwaiti oil tankers from Iranian attacks during the Iran-Iraq war.

British defence sources told media that the Revolutionary Guards' boats attempted to first stop and then divert the supertanker towards the Iranian shore.

The HMS Montrose, a Royal Navy frigate, then trained its guns on the Iranian boats and delivered a "cease and desist" message by radio.

Vice Admiral Jim Malloy, commander of the US Fifth Fleet covering the Middle East, accused the Revolutionary Guards of "unlawful harassment" of the British vessel.

"We continue to work closely with the Royal Navy, along with all our regional and global partners who share in our commitment to preserving and defending the free flow of commerce and the freedom of navigation," he said in a statement.

The Revolutionary Guards - a vast and powerful security organization - said there had been "no confrontation in the last 24 hours with any foreign vessels."

But, in a move that could add to the tensions, Gibraltar police announced the arrest on Thursday of both the Indian captain and officer of the seized Iranian tanker.

Britain and other European nations have been trying to preserve the 2015 nuclear deal by setting up their own independent trade mechanism that evades US sanctions on Tehran.

Iran had been complying with the deal - even after the US withdrawal - but in recent weeks Tehran has increased uranium enrichment in response, consciously breaking its own obligations under the JCPOA pact in hopes of countering Washington's moves.

But that is putting the European strategy under strain.