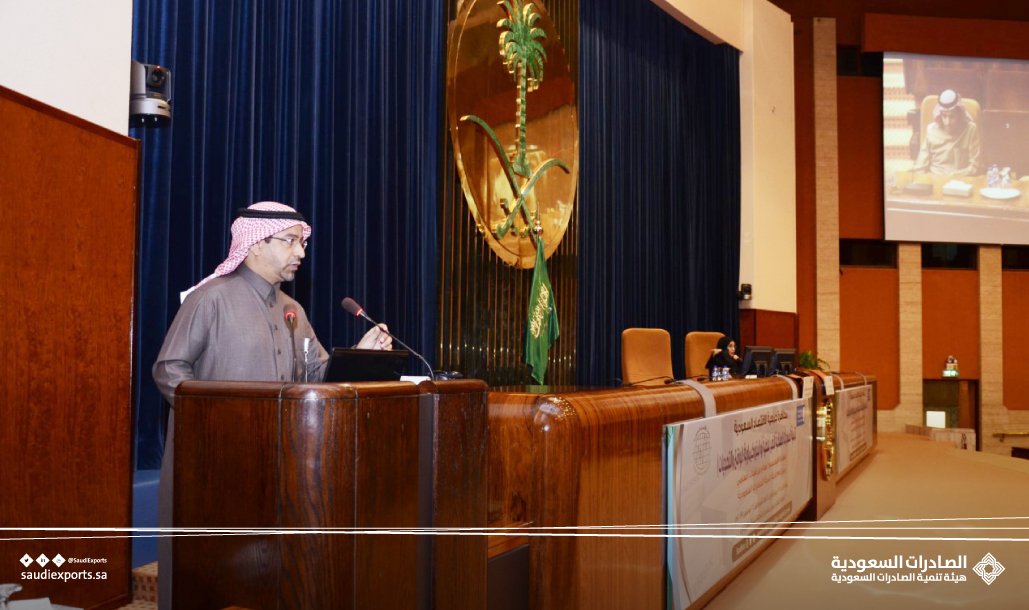 "Development of Non-Oil or Petrochemical Industrial Exports: Reality and Challenges" A lecture given by Mr. Saleh Al Solami to the Saudi business community

At the invitation of the Saudi Economic Society, the Secretary General of the Saudi Exports Development Authority (SAUDI EXPORTS), Mr. Saleh Al Solami gave a lecture entitled `` Development of Non-Oil or Petrochemical Industrial Exports: Reality and Challenges '' on Sunday, November 24, 2019, to members of the Society and the Saudi business community.

The event was inaugurated by the President of the Saudi Economic Association Dr. Noura Al-Yousef, who stressed the importance of export in diversifying the national economy and highlighted the opportunities for the Saudi industrial sector, which includes 7551 licensed factories with a total workforce of more than 800 thousand workers. The level of investment in the Saudi industrial sector has reached more than one trillion riyals. The Kingdom is also one of the world's largest producers of petrochemicals and its exports from the sector has reached major countries.

Vision 2030 aims to expand the foundations of sustainable development and linking the national economy with promising sectors. For this purpose, The Kingdom has launched, the National Industrial Development and Logistics Program (NIDLP), which is the largest amongst the vision’s programs to implement nearly 300 initiatives to promote diversification of the economic base and the development of non-oil exports, based on the sectors of industry, mining, energy and logistics.

These events come to shed light on the current developments in the economic sector resulting from the efforts of the Government of the Custodian of the Two Holy Mosques, may Allah protect him, at the highest levels to support the economy and restructure it in line with the successive global changes.

Mr. Al Solami began his lecture by highlighting the role of export as one of the sources of national income which can be used to finance import operations and reduce the balance of payments deficit. He also pointed out the impact of exports on the industrial supply chains and the preference of the accessing foreign markets, which increases competitiveness and market share of Saudi products.

To enhance access to international markets, SAUDI EXPORTS has put forth a national export strategy and aligned it with the Kingdom's Vision 2030, to achieve the objectives and overcome obstacles related to raising and developing exports. Today, the Saudi products can benefit from preferential treatment under Saudi Arabia's international, regional and bilateral trade agreements such as the Kingdom's membership in the World Trade Organization (WTO), the GCC Economic Agreement and the Greater Arab Free Trade Area (GAFTA). This is in addition to bilateral trade agreements with Singapore and the European Free Trade Association countries (EFTA).

The value of Saudi non-oil exports increased by 22% in 2018 compared to 2017. Asia is the most important region for the Kingdom’s exports which amounted to 42% in 2018 followed by the Middle East in which the share of Saudi Exports reached 37%. The main Saudi non-oil exports sectors were concentrated in the chemicals, building materials, food products and packaging. In the second quarter of 2019, the non-oil exports amounted to 56 billion riyals and the most important destinations are China, the UAE and India.

The SAUDI EXPORTS Secretary General also reviewed the strategic objectives developed by the Saudi Export Development Authority to carry out its role in the development of non-oil exports, which focuses on improving the efficiency of the export environment, raise awareness of export practices and export readiness of enterprises. The objectives also include facilitating of suitable export opportunities and increasing the visibility of Saudi products. In light of these objectives, SAUDI EXPORTS provides many services to the Saudi businesses to access international markets, from building capacities of exporters through training, evaluation, and providing specialized reports, to support Saudi exporters in finding buyers through international exhibitions and trade missions.

On SAUDI EXPORTS initiatives, Mr. Saleh Al Solami spoke about the Saudi Export and Import Bank (EXIM) which the Authority is currently working on its launch along with the relevant authorities. The Saudi EXIM bank will provide direct and indirect financing and insurance services in addition to non-financial services. The Authority has also launched the Saudi Exports Incentives Program, which offers 9 WTO-compliant incentives covering part of the costs incurred by Saudi companies at various stages of their export activities. Incentives covered by the program include the listing on e-Commerce platforms, individual participation in trade fairs, product certification, marketing and advertising, international product registration, facilitation of visiting potential buyers, export consulting, legal support, and specialized training.

At the end of the event, the SAUDI EXPORTS Secretary General invited companies wishing to benefit from the services and incentives to register on the website of the Saudi Export Development Authority, stressing that SAUDI EXPORTS team is investing all its potential towards improving the efficiency of the export environment, developing export capabilities, promoting exporters and their products, encouraging Saudi products, raising competitiveness to reach target markets, and to support the economy in a manner that achieves the objectives of Saudi exports, and meets the aspirations of the wise leadership towards diversifying the sources of income of the national economy.