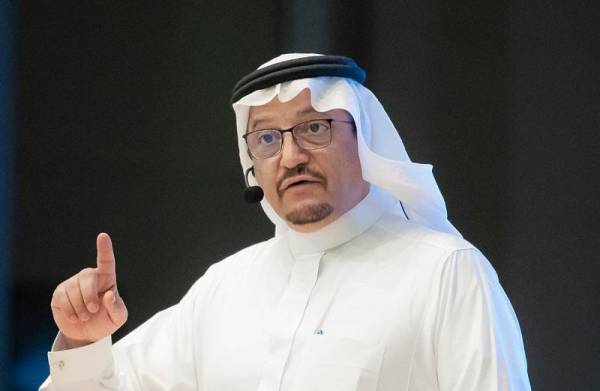 Minister of Education: We Were Able to Serve 6 Million Students in Distance Education without Interrupting their Education for One Day

Minister of Education Dr. Hamad bin Mohammed Al Al-Sheikh, in the
presence of Minister of Commerce and Acting Minister of Media Dr. Majid
bin Abdullah Al-Qasabi, and Minister of Communications and Information
Technology Eng. Abdullah bin Amer Al-Swaha, inspected the Virtual School
Content Production Center in Riyadh that serves distantly 6 million
students in the Kingdom of Saudi Arabia during the period of the schools
suspension.

At the outset of the inspection tour, the ministers were briefed on
the services of the virtual school through a documentary film that tells
the story of distance education in the public education, the
educational operations that take place by the efforts of teachers and
supervisors in preparing the educational content for the daily lessons
according to the study plan, and transferring them directly through 20
channels of IEN educational channels. They were also briefed on the
statistics and numbers of distance education in public and university
education since the decision of schools suspension.

At the end of the inspection tour, the Minister of Education
explained that after 10 hours of the announcement of the schools
suspension, the Ministry shifted from an educational system dependent on
the attendance of students to another educational system dependent on
the option of distance education, stressing that this transformation was
not easy, but the Ministry was able to serve 6 million students in the
public education within hours, and about 1 million and 600,000 students
in the universities sector through technical platforms and programs.

The Acting Minister of Media praised the great efforts exerted by
those responsible for the virtual school with the support and guidance
of the Minister of Education, as well as the efforts of teachers and
their dedication to deliver the education message without stopping,
stressing the role of every mother and father in supporting their sons
and daughters to continue their studies distantly.

He affirmed that the Coronavirus crisis has created a united team
capable of achieving an educational achievement that we are proud of.

Then, the Minister of Communications and Information Technology said
that the digital infrastructure in the Kingdom of Saudi Arabia is solid
today with the support and directives of the leadership, adding that
the rate of internet access has exceeded 94 percent.

He affirmed that these numbers come with a support of a network of optical fibers, which reaches today to 3,500,000 houses.