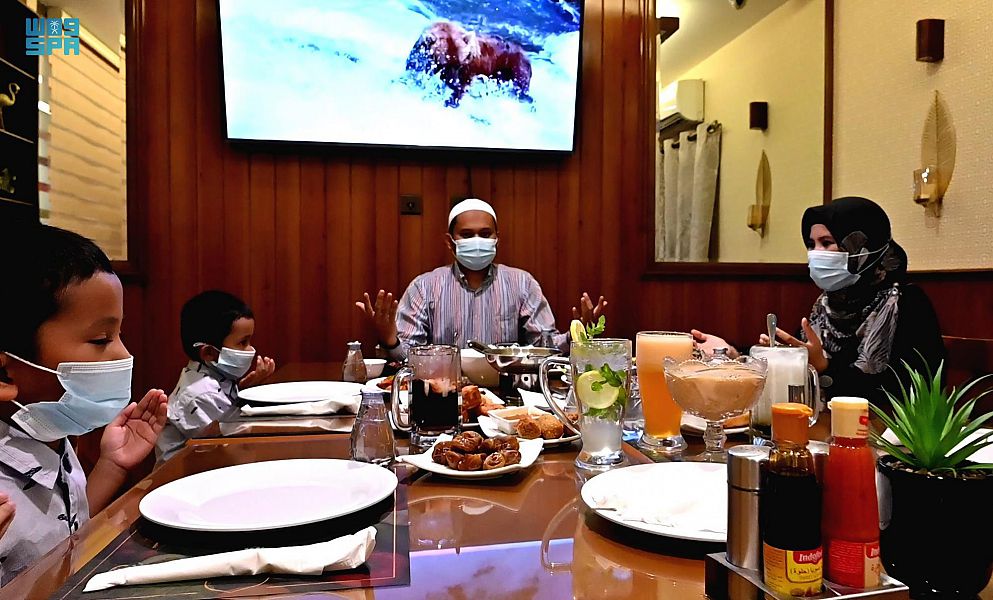 Many Muslim families living in the Kingdom of Saudi Arabia preserve their cultural heritage in celebrating festive seasons including the holy month of Ramadan, where they practice the prevailing traditions in their homelands to remind them of their loved ones and relatives in an atmosphere filled with love and joy.
The shops and restaurants designated for residents scattered across Saudi Arabia contributed to providing the necessary supplies and tools needed to commemorate their occasions, especially the holy month of Ramadan, which all Muslims await eagerly every year.
The Saudi Press Agency (SPA) was keen to join those families in their celebration of the holy month.
Maman Sufyan, an Indonesian citizen, told SPA that Ramadan enjoys a special place among Indonesians and is widely received by young people with beating drums, a common tradition to announce the coming of the month, while the children roam the residential streets dressed in colorful clothes, carrying small lanterns and torches, and chanting some songs to welcome the holy month of Ramadan.
Sufyan described his stay in the Kingdom of Saudi Arabia with his family as a wonderful experience, for the affection and warm reception he received from his Saudi neighbors and friends, and his influence with their customs and traditions during the month of Ramadan and other seasons, making the idea of settling in this country a dream and a desire for everyone.
He added that the remarkable presence of Indonesian families in Saudi Arabia contributed to easing the feeling of alienation and the feeling of homesickness among them, especially in light of the facilities being provided to them, which made them enjoy the hospitality, like other communities, in every place they visit and move to.
For his part, Mostaeen Yahya, also an Indonesian national, spoke about his daily schedule in Ramadan with his family at his residence in Jeddah, which varies between exchanging family visits to have Ramadan Iftar, drink tea and perform Tarawih prayers. He explained that after the prayers they gather to eat dinner and chitchatting with friends.
Yahya pointed out several Ramadan customs in Indonesia, especially at Iftar, where rice is their favorite meal and is often eaten boiled or roasted, and the "Mee Soto" meal made of chicken or beef for soup as well as the "Satay" dish, which is grilled meat usually served with rice or pistachio sauce or curry rice or Indian rice in addition to grilled fish and some fresh fruits, which are usually harvested from farms spread in most cities as well as boiled potatoes and syrup (Timun Suri), which is the official Ramadan drink in Indonesia.