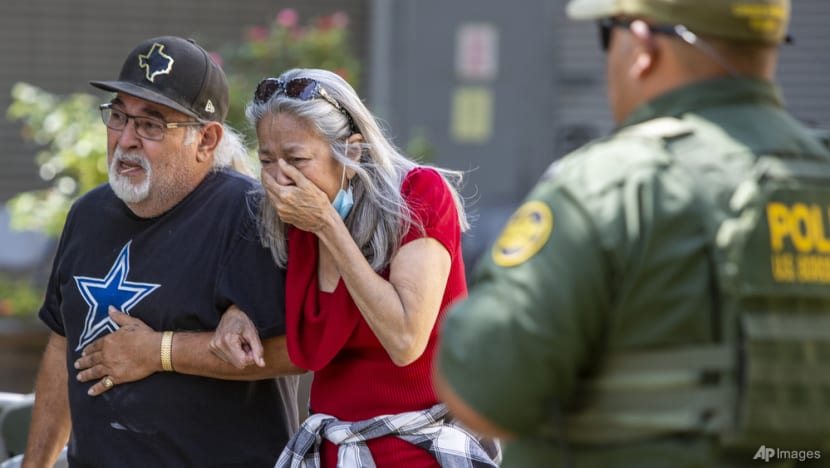 A woman cries as she leaves the Uvalde Civic Center on May 24, 2022. (Photo: AP/The San Antonio Express/William Luther)
WASHINGTON - AFP

"To lose a child is like having a piece of your soul ripped away," said US President Joe Biden - a twice-bereaved father channeling his own heartache to console a nation devastated by another mass shooting on Tuesday (May 24).

Over his long years in public office, the 79-year-old has often spoken about the tragic death of his infant daughter.

Naomi, aged one, died in a 1972 car crash, which also took the life of Biden's first wife Neilia.

Biden has also publicly mourned the 2015 death of his eldest son Beau, taken by brain cancer at 46 years old.

But on Tuesday, he reached for those two instances of life-changing grief to comfort a new set of families whose lives have been torn asunder.

Hours after a teenage gunman killed at least 19 young children at an elementary school in Ulvade, Texas, Biden stepped up to a presidential lectern in the Roosevelt Room of the White House.

When Biden has given speeches after such shootings - most recently after a racist massacre in Buffalo, New York - or after disasters, he has often reached for words of hope, as well as condolences.

He has promised bereaved families that a day will come when their pain would ease, when the memory of a loved one will bring smiles and not just tears.

But on Tuesday, he offered no such a horizon.

Like his successors, Biden was being called on to deliver remarks that would explain the inexplicable to Americans and to the world.

But his thoughts, and his remarks quickly turned to a much narrower audience.

"There's a hollowness in your chest, and you feel like you're being sucked into it and never going to be able to get out," he said, eyes occasionally flitting downward and his hands tightening.

"It's suffocating. And it's never quite the same."

Instead, this devoutly Catholic president turned to his wife of more than four decades, first lady Dr Jill Biden, and to a faith that has comforted him over the years.

"The Lord is near to the brokenhearted and saves the crushed in spirit," he said.

"Tonight, I ask the nation to pray for them, to give the parents and siblings the strength in the darkness they feel right now."

"Our prayer tonight is for those parents, lying in bed and trying to figure out, 'Will I be able to sleep again? What do I say to my other children? What happens tomorrow?'"