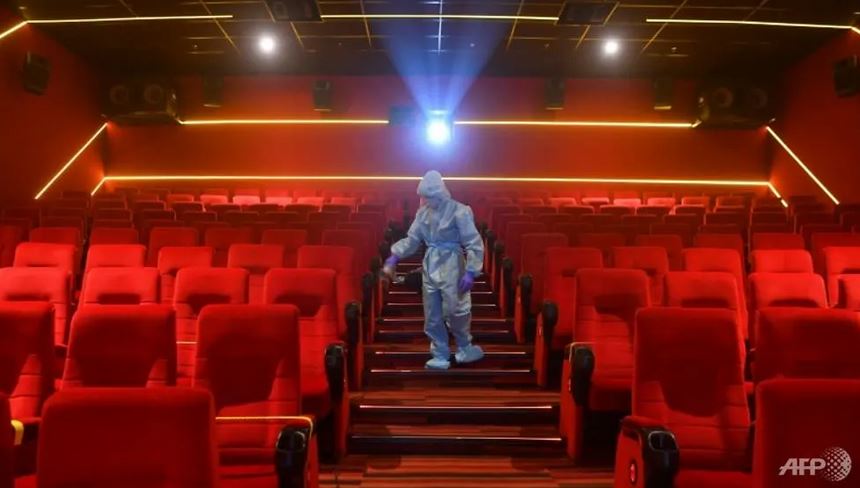 The films may be old, masks mandatory and the usual lavish menus absent, but Indian cinema-owners hope movie-lovers will still flock back Thursday (Oct 15) when theatres begin reopening after a nearly seven-month COVID-19 shutdown.

The pandemic has clobbered cinemas around the world, but in India, it has upended a culture that treats movies as something of a religion, and its stars as gods.

After the recent loss of several luminaries to coronavirus, cancer and even suicide - as well as a raging scandal over drug use in Bollywood - the world's most prolific film industry is desperate for some good news.

But it may have to wait.

INOX Leisure, India's second-largest multiplex operator, says the chain will only be screening old films when it reopens Thursday. 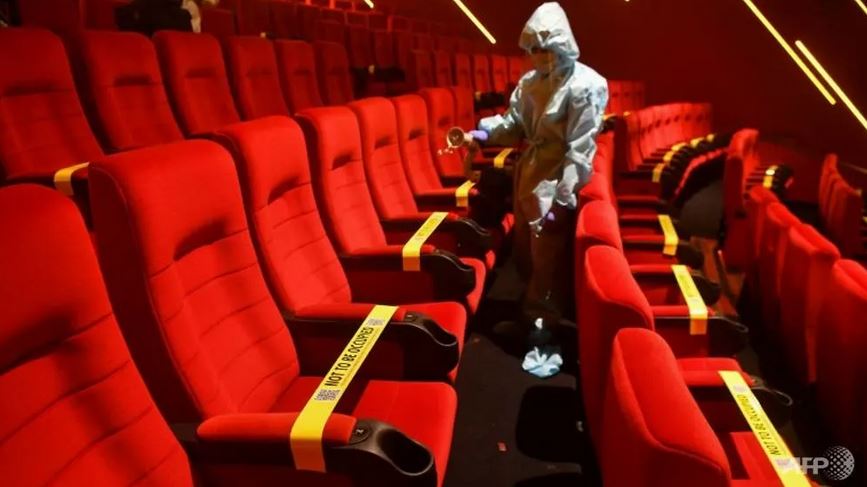 Cinemas in India will have half the seats left empty for social distancing when they re-open on Oct 15, 2020. (Photo: AFP/Indranil Mukherjee)

"Right now, what we are working on is getting the confidence of people back by letting them know that the cinemas are safe and secure," said Lalit Ojha, a regional director for the company.

A trip to the cinema remains an affordable pursuit in India, with as little as 75 rupees (US$1) buying three hours of drama, dancing and song in air-conditioned luxury. At high-end cinema chains like INOX, patrons can even get biryani or hot fudge sundaes delivered to their recliners.

But with temperature checks at the door, half the seats left empty for social distancing, and only a limited selection of food, the experience now is a far cry from the luxuries previously on offer.

Nervous producers have so far refrained from lining up any big-ticket releases, with many pushing their films directly to streaming platforms like Netflix, Amazon Prime and Disney+ Hotstar following the pandemic closures.

"We are hoping to have a blockbuster release at Diwali," Ojha said, referring to next month's Hindu festival that usually spells a bonanza for theatres and retail businesses.

Although analysts point to pent-up demand for the big-screen experience among fans used to watching a film every week - India had nearly 1,800 releases in 2018 - many may not brave the trip just to watch old movies.

"It's a vicious circle - people won't come to cinemas unless there is fresh content. And producers won't release a movie without some guarantee that it will do good business," film trade analyst Komal Nahta told AFP.

"Ultimately, someone will have to take a chance and release an exciting film," he said.

A handful of producers are reportedly ready to take the risk, with at least one Hindi film, Suraj Pe Mangal Bhari, due for release on Nov 13 - Diwali weekend.

Top Bollywood producer Aditya Chopra is also preparing to release Bunty Aur Babli 2, a sequel to a 2005 hit, at the same time, according to media reports.

But with India's virus cases surging past seven million, the threat of infection remains strong, prompting authorities in Mumbai, the home of Bollywood, to put off reopening cinemas for the time being.

"Mumbai is the heart of the film industry - if theatres are closed there, half the battle is already lost," said analyst Nahta.

In such uncertain times, if the remaining cinemas are able to sell even half the tickets available - 25 per cent of normal capacity - they can celebrate, he said.

"If they manage to fill 60 per cent of the seats on offer, it will be superb news for the industry."