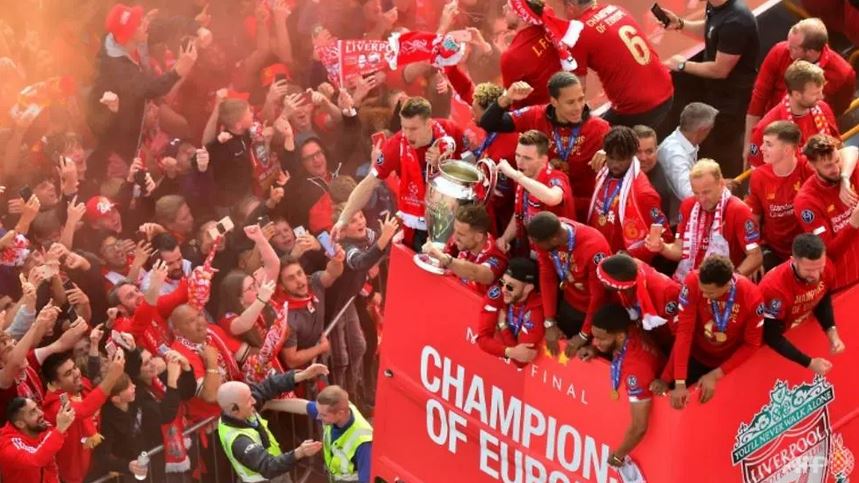 Football clubs step up help for communities as coronavirus bites

Prevented from plying their usual trade by the coronavirus pandemic, English football clubs are turning to their attentions to helping local communities cope with huge disruption to daily life.

Liverpool's cruise towards a first league title in 30 years has been put on hold, with the Premier League suspended for the foreseeable future.

But the loss of four home games for the Reds and five for neighbours Everton could have had much more severe consequences for those dependent on the North Liverpool Foodbank.

Around a quarter of food donations are collected at Liverpool and Everton home games by an organisation called Fans Supporting Foodbanks.

Liverpool's players and the club's foundation have contributed £40,000 ($46,000) towards ensuring the foodbank does not run dry at a time of crisis.

"If people are having to use a foodbank week in, week out anyway, the most disadvantaged in our community will be the hardest-hit during this period of time," LFC Foundation director Matt Parish told AFP.

"They can't stockpile, they can't build up reserves of food in the house. They will need that ongoing support during this time."

Liverpool staff will take an active role in the collection and distribution of food due to the added complication that many of the foodbank's volunteers are older people, who are more at risk from the virus.

The foundation's range of programmes in the community, including football coaching, sessions for disabled children and activities for the elderly have been cancelled.

However, provisions are being made by providing fitness videos available at home and keeping in touch with people who are isolated.

"We are very conscious that physical activity is important, but also that people don't feel like they are just stuck at home," said Parish.

"We have the ability to call people to maintain that contact. It's going to be challenging for all of us to isolate, but if you are older or living alone that is probably even more stark."

At the other end of the Football League pyramid, at the bottom of League Two, Stevenage are doing all they can to help provide for and protect those at risk.

Owner Phil Wallace has provided the resources for a community care line that will go live on Monday. Local residents over 70 will be able to call to have food delivered, prescriptions collected or even just to chat at a time when they may be forced to self-isolate.

"How do they get their food if they can't go out?" Wallace said.

"We've got kitchens we are not using, we've got lads who can't play football. I can make food, take food to people using the staff we've got, we can pick up prescriptions, we can provide a helpline for them."

The financial ramifications of a shortened season for clubs in the lower leagues are grave, but Wallace is more concerned with the health and well-being of those in the community.

"Every single club at every single level talks about being a community club," he said.

"This is a wartime spirit. When you get into this battlefield situation, which is what doctors and nurses are going to be in before long, if you are a community club you are going to be at the heart of the community aren't you?

"Community club doesn't just mean going round to schools and teaching kids to play football. Community club is surely when you are really needed, to do something."

Chelsea on Wednesday announced plans to do their bit by opening a hotel at Stamford Bridge to accommodate National Health Service staff who may otherwise face long commutes to work.

And Brighton have made a commitment to pay more than 600 casual staff who work on matchdays for their remaining five home games, whether or not the matches actually take place.

"It is important we support them, and through them our local economy at a difficult time and hopefully give them some reassurance, regardless of what else happens, they still have that income from us to come," said Brighton chief executive Paul Barber.