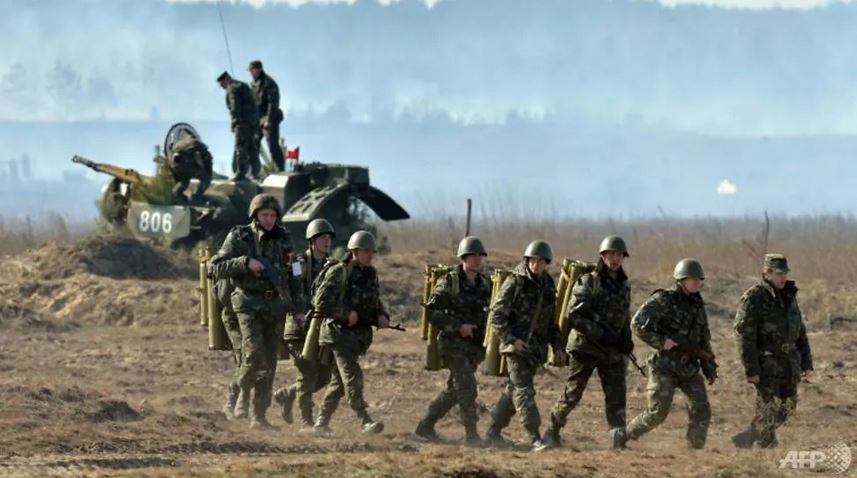 Since coming to power in May, comedian-turned-president Volodymyr Zelensky, 41, has sought to revive a peace process to end the separatist conflict in eastern Ukraine that has claimed some 13,000 lives since 2014. (Photo: AFP/SERGEI SUPINSKY)
BOGDANIVKA, Ukraine - AFP

Ukraine foes to pull back troops ahead of Russia summit

Ukraine's army and Kremlin-backed separatists are set Friday (Nov 8) to complete the last phase of a troop pullback in the war-torn east in a key step towards a high-stakes summit with Russia.

The long-awaited move is a precondition for the first face-to-face talks between Russian President Vladimir Putin and Ukrainian leader Volodymyr Zelensky.

The summit, whose date has yet to be set, will be mediated by French President Emmanuel Macron and Germany Chancellor Angela Merkel.

As long as no ceasefire violations take place in the area, the withdrawal was due to start around noon (10:00 GMT) in the Donetsk region between the villages of Petrivske in the separatist-controlled zone and Bogdanivka in Kiev-controlled territory, Ukrainian military spokesman Andriy Ageyev told AFP.

But in a sign of persisting tensions, a Kiev soldier was killed Thursday in the Donetsk region although not in the disengagement area, the army said.

The withdrawal of forces would be the "final precondition" for organising the four-way summit, Ukraine's Foreign Minister Vadym Prystaiko said this week.

He has expressed hope that the meeting, the first at such a high level since 2016, could take place in Paris in November.

The summit has been repeatedly postponed as previous attempts to organise pullbacks of troops have failed, most recently on Monday.

Russia has said it backs a new summit but refused to commit to a timetable.

"We want to hold the summit as soon as possible, but at the same time we consider this summit has to be well organised to ensure it gets the necessary results," Kremlin spokesman Dmitry Peskov said Tuesday.

He added it was "too early to say" whether the meeting could take place this year because "many questions" remained unresolved.

The troop pullbacks are one of the Kremlin's conditions to stage a summit that Kiev hopes could restart the stalled peace process.

Soldiers on Friday were set to signal their intention to withdraw by firing a flare before moving back a kilometre, Kiev said.

Monitors from the Organisation for Security and Co-operation in Europe (OSCE) will be observing the disengagement which could be spread over several days.

If the pullback goes ahead, it raises the possibility of a withdrawal along the more than 400km frontline.

Since coming to power in May, comedian-turned-president Zelensky, 41, has sought to revive a peace process to end the separatist conflict in eastern Ukraine that has claimed some 13,000 lives since 2014.

But those efforts have stalled as Zelensky's plan, including the troop pullback, has been strongly criticised in Kiev, especially by war veterans and nationalists.

In the run-up to the summit, Ukrainian, Russian and separatist negotiators also agreed on a roadmap that envisages a special status for the separatist territories if they conduct free and fair elections under the Ukrainian constitution.

The war in eastern Ukraine broke out a month after Moscow annexed the Crimean peninsula from Ukraine in 2014.

Ukraine and its Western allies accuse Moscow of giving financial and military backing to separatists, which Russia denies.