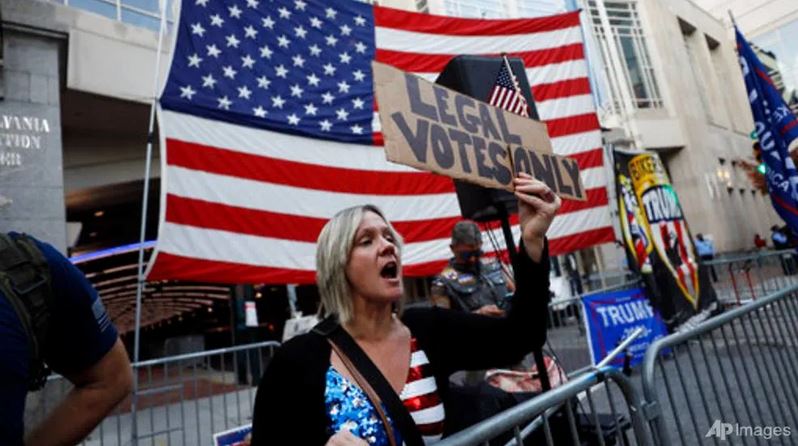 President Donald Trump's election campaign on Wednesday (Nov 18) asked a judge to declare him the winner in Pennsylvania, saying the state's Republican-controlled legislature should select the electors that will cast votes in the US Electoral College system.

In a court filing, the campaign asked US District Judge Matthew Brann to considering issuing an order that "the results of the 2020 presidential general election are defective and providing for the Pennsylvania General Assembly to choose Pennsylvania's electors".

The request was part of a larger bid by the campaign to amend a Nov 9 lawsuit challenging the outcome in Pennsylvania.

Democratic candidate Joe Biden won with 306 electoral votes to Trump's 232 nationwide. The winner needs 270, and Trump would have to flip the outcome in Pennsylvania, with 20 electoral votes, and two other states. Biden won Pennsylvania by around 82,000 votes, according to Edison Research.

Trump's legal team, led by his personal lawyer Rudy Giuliani, also sought permission from Brann to put back legal claims that it dropped on Sunday from the lawsuit. They said Republican observers were denied access to the counting of mail-in ballots, an assertion election officials dispute.

The lawsuit also alleges inconsistent treatment by county election officials of mail-in ballots. Some counties notified voters that they could fix minor defects such as missing "secrecy envelopes" while others did not.

Brann expressed scepticism of the lawsuit at a hearing on Tuesday.

Trump's case is deeply flawed and does not give Trump "any viable path to overturning the results", said Justin Levitt, a Loyola Law School professor who has been tracking the litigation.

The amended filing "does not offer any indication that a number of ballots sufficient to make up the difference in the election were invalid", Levitt said, adding that "courts won't toss ballots out (or otherwise stop an election tally in progress) without actual proof that the ballots in question were invalid".

Republican Trump's campaign has filed a flurry of lawsuits in a long-shot bid to reverse the election. Trump has claimed without evidence that the election was stolen.

A Reuters poll on Wednesday showed about half of Republicans believe Trump had the election stolen from him.