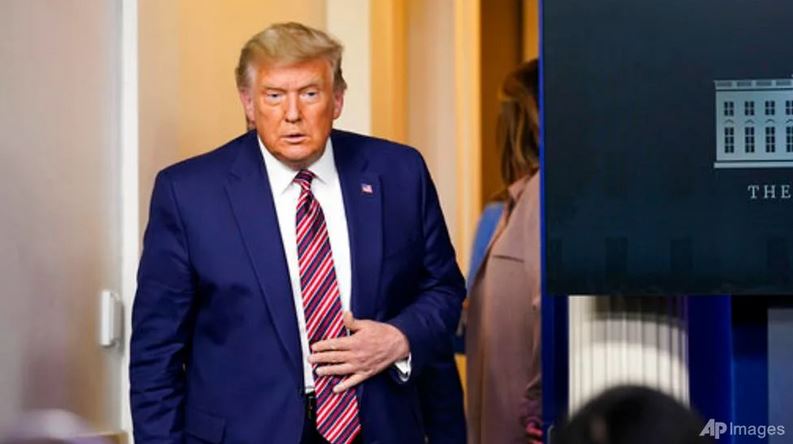 President Donald Trump's desperate bid to overturn the US election was dealt a new setback on Saturday (Nov 21) when a federal judge threw out his campaign's attempt to invalidate millions of votes in Pennsylvania.

US District Court Judge Matthew Brann ruled that the Trump campaign's efforts to stop Pennsylvania officials from certifying Democrat Joe Biden as the winner in the state was "unsupported by evidence".

"This Court has been presented with strained legal arguments without merit and speculative accusations," Brann wrote.

"In the United States of America, this cannot justify the disenfranchisement of a single voter, let alone all the voters of its sixth most populated state," he wrote.

The lawsuit sought to stop officials from certifying Biden's victory in the state, arguing that some counties wrongly allowed voters to fix errors on their mail ballots.

Republican Senator Pat Toomey of Pennsylvania said Trump had "exhausted all plausible legal options" to challenge the result in Pennsylvania. He called on Trump to concede the election and congratulated Biden on his victory.

Few other Republicans in Congress have called on Trump to concede.

Trump's lawyers said they would appeal the ruling, with the hopes of quickly reaching the US Supreme Court.

"We are disappointed we did not at least get the opportunity to present our evidence at a hearing. Unfortunately the censorship continues," Rudy Giuliani and Jenna Ellis said in a statement.

For Trump to have any hope of overturning the election, he needs to reverse the outcome in Pennsylvania, which is scheduled to be certified by state officials on Monday.

"Our country will not tolerate Trump's attempt to reverse the results of an election that he decisively lost," Biden spokesman Michael Gwin said in a statement.

Giuliani, who made his first courtroom appearance in 30 years for a hearing in the case on Tuesday, has floated a variety of conspiracy theories as the Trump team alleged that the election was marred by widespread voter fraud.

Election officials across the country say there was no widespread fraud, and Trump's own administration has called the election "the most secure in American history".

Trump's campaign and its allies have filed dozens of lawsuits across the country challenging the results.

They have had little success so far, and time is running out to build a case as some states have started formalising results. In Pennsylvania, counties are due to file official results on Monday to the secretary of state, who will then certify the tallies. Biden leads Trump by more than 81,000 votes in the state.

Benjamin Geffen of the Public Interest Law Center, who was involved in the case, said Saturday's ruling showed Trump will not be able to overturn Biden's Pennsylvania victory in court.

"As far as litigation goes I believe this is the end of the line for them," he said.

Trump is seeking to invalidate or change the election results through recounts and direct pressure on lawmakers in several states. He would need to prevail in at least three states to prevent Biden from being sworn in as president on Jan 20 - an unprecedented action.

In Michigan, Republicans wrote to state authorities on Saturday asking them to wait 14 days to certify Biden's victory to allow for an audit of ballots in Wayne County, which includes the majority-black city of Detroit. The letter cited allegations of "irregularities" that have not been substantiated. Biden won 154,000 more votes than Trump in Michigan.

That effort faces long odds. A spokesperson for Michigan's top election authority said state law does not allow for audits before the vote is certified, which is due to take place on Monday. Allegations of widespread fraud have been found to be baseless, the spokesperson said.

Two leading Republican Michigan lawmakers who came to Washington at Trump's behest said after meeting him on Friday that they had no information that would change the outcome of the election in the state.

In Wisconsin, an official said poorly trained observers for the Trump campaign were slowing a partial recount by challenging every ballot and raising other objections.

"Observers are disruptive. They are asking question after question, telling the tablulators to stop, stop what they're doing and that is out of line, that's not acceptable," Milwaukee County Clerk George Christianson told reporters.

A manual recount and audit in Georgia confirmed Biden on Friday as the winner in the southern state, the first Democratic presidential candidate to win Georgia in nearly three decades.

The Trump campaign has two business days to request a recount in Georgia. Trump's legal team has also said it plans a lawsuit in the state, but has not provided specifics.

Trump's accusations have continued to inflame his hard-core Republican base.

Hundreds of supporters gathered at the statehouse in Atlanta on Saturday, with video posted online showing speakers denouncing the media for calling Biden the election winner, as well as state Republican leaders for certifying the results.

Police in riot gear were deployed to separate them from counterprotesters who gathered nearby.

The General Services Administration, run by a Trump appointee, has not recognised Biden's victory, preventing his team from gaining access to government office space and funding normally provided to an incoming administration ahead of Inauguration Day on Jan 20.

Critics say the delay and Trump's refusal to concede have serious implications for national security and the fight against the coronavirus, which has killed nearly 255,000 Americans.