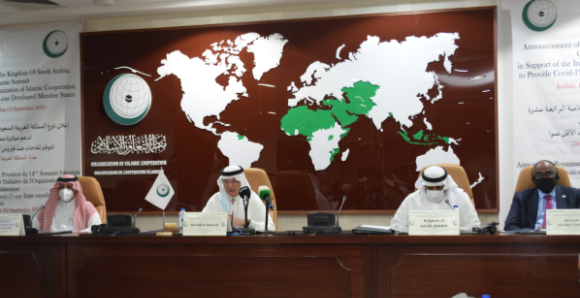 The General Secretariat of the Organization of Islamic Cooperation (OIC) held a press conference at its headquarters in Jeddah, on Monday, 13 September 2021, to announce the generous donation of the Kingdom of Saudi Arabia, chairman of the 14th Islamic Summit, the OIC Host Country, at a value of 20 million Saudi riyals, in coordination with the King Salman Humanitarian Aid And Relief Centre (KSrelief). The donation is in support of the initiative of the Organization of Islamic Cooperation to provide vaccines against the COVID-19 virus (novel Coronavirus), for two categories: health workers and the elderly in the 22 OIC least developed countries (LDCs), including the State of Palestine.

The press conference to announce the donation of Saudi Arabia was attended by the OIC Secretary-General, Dr. Yousef A. Al-Othaimeen, the permanent representative of the Kingdom of Saudi Arabia to the OIC, Dr. Saleh bin Hamad Al-Suhaibani, and the director of the King Salman Humanitarian Aid and Relief Centre in Jeddah, Dr. Abdullah Muhammad Al-Zahrani.

The Secretary-General stressed that this initiative comes in the context of its continuous efforts to enhance Islamic solidarity and support the issues of the Muslim world, enhance its role, strengthen its presence on the international arena, and develop joint Islamic action in all fields between Member States and the rest of the world for the good of the Muslim nation.

At the press conference, the Secretary-General said that the OIC General Secretariat appreciates the generous donation by the Kingdom of Saudi Arabia, which is the first response to the OIC’s appeal to provide vaccines for the LDCs. Al-Othaimeen added that he records, at this opportunity, his profound thanks to the Custodian of the Two Holy Mosques King Salman bin Abdulaziz Al Saud, Chairman of the Islamic Summit, and His Royal Highness, Crown Prince Mohammed bin Salman, may Allah protect and preserve them, for their support and rapid response to the appeal made by the OIC to support its initiative.

In this regard, the Secretary-General also thanked the Member States that provided vaccines against the novel Coronavirus bilaterally to the countries most in need.

The Secretary-General pointed out that the General Secretariat had approved the initiative of the Islamic Solidarity Fund (ISF) to allocate a bank account to help Member States, especially the LDCs in the three geographical groups, to address the Coronavirus pandemic.

The General Secretariat had held a series of emergency meetings at several levels, starting with the emergency Foreign Ministers meeting chaired by the Kingdom of Saudi Arabia, in April 2020, preceded by a meeting of the OIC Steering Committee on Health, which both were followed by a number of meetings of specialized and subsidiary organs in the educational, religious and women’s fields in order to address problems of those categories resulting from the outbreak of the pandemic. Al-Othaimeen indicated that these efforts are still ongoing, as evident through the recent initiative, a matter that is of great benefit to the Member States, stressing that the OIC has expanded its cooperation with its subsidiary, affiliated and specialized organs and the international community in order to achieve more for the best interest of the OIC Member States.

The Secretary-General noted the response of the Islamic Development Bank Group, which launched the Strategic Preparedness and Response Programme for the COVID-19 Pandemic, which was the best help and support in these painful conditions, explaining also that the General Secretariat launched a wide media and awareness campaign at the beginning of the pandemic outbreak and employed all its electronic capabilities in order to keep pace with the change that occurred in addressing the pandemic at that time.

At the end of the press conference, the Secretary-General once again called upon the Member States, that are in a position to do so, to hurry to donate to the account of the OIC General Secretariat, and urged the Islamic Solidarity Fund and the Islamic Development Bank Group to contribute with King Salman Humanitarian Aid And Relief Centre, which provided a unique model of giving and humanitarian action.

It is noteworthy that the OIC opened a bank account for the aforementioned initiative, and the method of purchasing and delivering vaccines, approved by the World Health Organization, will be arranged for the countries concerned in cooperation with the King Salman Humanitarian Aid and Relief Centre.