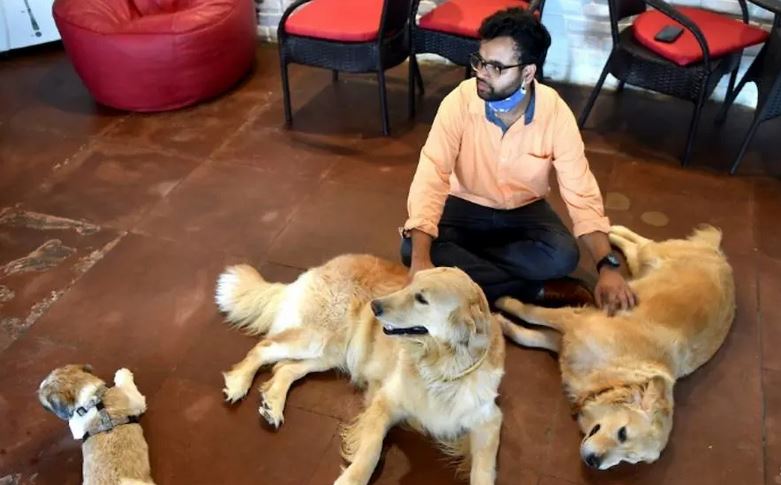 As virus case numbers grew in India and more people were stuck at home, early fears about pets being potential virus carriers turned into a search for friendship from four-legged creatures. (Photo: AFP/Money SHARMA)
CHENNAI - AFP

When Lakshmi Sundar brought a malnourished stray puppy into her home in the Indian city of Chennai, she thought the brown-and-white bundle of energy would be a guest for just a few weeks.

With the world marking International Dog Day on Wednesday, her household is one of a growing number across India to have adopted man's best friend to cope with the loneliness inflicted by the pandemic.

"We bonded so well from day one, which is very rare ... I don't bond that easily with anyone," Sundar, a 53-year-old who treats diabetes patients, told AFP of the pup her daughter named Meenakshi after a Hindu warrior goddess.

"She's a bundle of joy," said Sundar as she explained how no-one in the house wanted to give Meenakshi to another family. "And she has had a very calming effect on my daughter."

India - which has more than three million coronavirus cases - imposed a months-long lockdown to try and halt its spread.

As case numbers grew and more people were stuck at home, early fears about pets being potential carriers turned into a search for love and friendship from the four-legged creatures.

"When the lockdown was opened partially, people were rushing and coming to take puppies," Dawn William of the Blue Cross of India animal-welfare group in Chennai told AFP.

In the first half of August, about 68 puppies were adopted from the group's shelter, he said.

"There are people and children who have time to spend with a pet. You know you have to care for it, you have to give him a bath, you have to play with him ... so it keeps you going."

But while a growing middle class is becoming open to having dogs as pets, many still prefer pedigrees, which are more of a status symbol.

Shelter owners say, however, there has been a cultural shift - with younger people more willing to adopt mixed-breed strays.

Animesh Katiyar, who owns the Fur Ball Story dog cafe in Gurgaon near New Delhi, says there has been a jump in demand for his services from young professionals, many of whom are now working from home.

"A pet just helps a lot because they're supposed to be providing unconditional love," Katiyar said, adding that the number of calls for his services has jumped from one per day to seven in recent months.

One of Katiyar's regular customers is Avani Naresh, 29, an IT business owner who had a lifelong fear of dogs.

Eager to overcome his phobia, he sought Katiyar's help last year and slowly learned to become comfortable around mutts.

When the pandemic hit, the cafe shut and Naresh - unable to have a pet as he splits his time between Delhi and Gurgaon - realised he missed the animals he used to run away from.

"A dog can be a big, big game-changer in terms of an emotional journey. A dog absorbs your entire stress. They understand ... what you are going through," Naresh told AFP.

"I think if I had a dog during the lockdown, I think my anxiety levels, my stress levels would have been to the minimum."