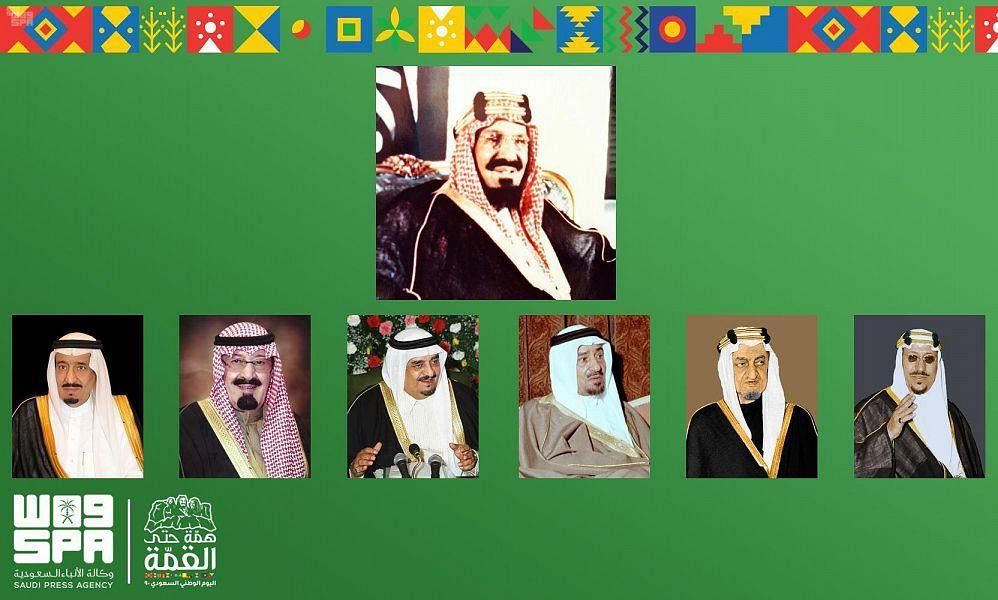 The Kingdom of Saudi Arabia’s leadership and people will celebrate
tomorrow, Wednesday, September 23, 2020, the 90th National Day of Saudi
Arabia, after the historical announcement of the late King Abdulaziz bin
Abdulrahman Al Saud of Saudi Arabia’s unification under "There is no
god but Allah; Muhammad is the Messenger of Allah" banner.

Saudi National Day is the day on which the late founder named the
Kingdom of Saudi Arabia throughout the country, after 32 years of wars.

On that day, a young country was established that prided itself by
the application of the Islamic Sharia and its preservation of human
values, promoting peace and goodness and in search of knowledge and
development towards a better future for its people, the Islamic nation
and the whole world.

King Abdulaziz ordered at the beginning of structuring Saudi Arabia
to pay great attention to the Two Holy Mosques and their expansion and
to serving pilgrims and Umrah performers, as well as establishing
schools and hospitals, building villages, rehabilitating the soil, and
exploring irrigation water in order to support agriculture.

Then, King Saud bin Abdulaziz Al Saud was the first to follow this
approach and to work within its framework until the features of progress
emerged and the structures of a number of basic institutions and
agencies in the country were completed.

In the era of the pioneer of Islamic solidarity, who succeeded King
Saud, King Faisal bin Abdulaziz Al Saud, achieving accomplishments
continued, and during his reign, the Kingdom of Saudi Arabia began the
implementation of the ambitious five-year plans for development.

In the reign of King Khalid bin Abdulaziz Al Saud, building and
growth continued to serve the country and citizens in particular and
Islam and Muslims in general. The development plans also connected with
each other for the sake of achieving more prosperity and stability.

The achievements during the reign of King Fahd bin Abdulaziz Al Saud
were characterized by comprehensiveness and integration to form a
comprehensive development process for building a nation and a wise and
unique leadership that embodied many qualities that he had, the most
prominent of which was his adherence to the holy Quran and prophetic
Sunnah, and his dedication to serving his homeland, citizens, the
Islamic nation and the entire humankind.

During the era of the Custodian of the Two Holy Mosques King
Abdullah bin Abdulaziz Al Saud, the Kingdom of Saudi Arabia witnessed
more giant developmental achievements throughout the nation in various
sectors, including education, health, transportation, industry,
electricity, water, agriculture and the economy.

Today, Saudi Arabia witnesses a distinguished present, looking
forward to a more distinguished future full of confidence in the title
of the stage, the Custodian of the Two Holy Mosques King Salman bin
Abdulaziz Al Saud, who has been making, since the beginning of his
reign, an effort to advance Saudi Arabia. The activities varied in
various fields at regional and international levels, preceded by
accomplishments at various stages during his reign in many positions.

Today, Saudi Arabia’s National Day passes by while we live in a
bright reality established by the late founder King Abdulaziz.