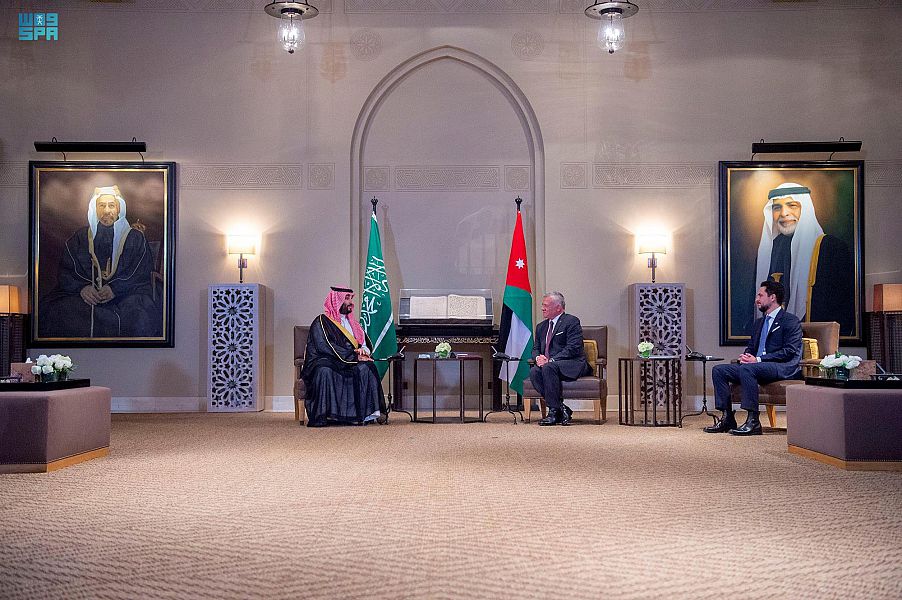 His Royal Highness Prince Mohammed bin Salman bin Abdulaziz Al Saud, Crown Prince and Deputy Prime Minister of the Kingdom of Saudi Arabia held a meeting today with His Majesty King Abdullah II bin Al Hussein of the Hashemite Kingdom of Jordan, in the presence of His Royal Highness Prince Al Hussein bin Abdullah II, Crown Prince of the Hashemite Kingdom of Jordan, as well as an expanded session of talks in the presence of the delegations' members of the two countries, in the Jordanian capital, Amman.
At the outset of the bilateral meeting, His Majesty the King of Jordan welcomed HRH the Crown Prince to his second country, while HRH the Crown Prince expressed his thanks and appreciation for the warm welcome accorded to him and his companions.
HRH the Crown Prince conveyed the greetings and appreciation of the Custodian of the Two Holy Mosques King Salman bin Abdulaziz Al Saud to His Majesty, while His Majesty extended his greetings and appreciation to the Custodian of the Two Holy Mosques.
They also reviewed aspects of bilateral relations between the two countries and prospects for joint cooperation and opportunities to enhance them in various fields, in addition to discussing the latest regional and international developments and coordinating efforts in this regard.
At the conclusion of the talks, His Majesty King Abdullah II decorated HRH the Crown Prince with Al Hussein bin Ali Necklace as an embodiment of the distinguished historical relations that bind the two countries, as the necklace is the highest civil medal in the Hashemite Kingdom of Jordan, and is awarded to kings, princes and heads of states.
The session of the talks was attended by Prince Abdulaziz bin Salman bin Abdulaziz, Minister of Energy; Prince Turki bin Mohammed bin Fahd bin Abdulaziz, Minister of State and Cabinet's Member; Prince Abdulaziz bin Turki Al-Faisal, Minister of Sports; Prince Abdulaziz bin Saud bin Naif bin Abdulaziz, Minister of Interior; Prince Abdullah bin Bandar bin Abdulaziz, Minister of the National Guard; Prince Faisal bin Farhan bin Abdullah, Minister of Foreign Affairs.
It was also attended by the Minister of State and Cabinet's Member Dr. Musaed bin Mohammed Al-Aiban; the Minister of Commerce Dr. Majid bin Abdullah Al-Qasabi, who is also the Acting Minister of Media; the Minister of Investment, Eng. Khalid bin Abdulaziz Al-Falih; the Minister of Transport and Logistics Services, Eng. Saleh bin Nasser Al-Jasser and the Saudi Ambassador to Jordan Naif bin Bandar Al-Sudairy.
On the Jordanian side, the session of the talks was attended by the Prime Minister Dr. Bisher Al Khasawneh; Chief of the Royal Hashemite Court Youssef Hassan Al-Esawy; Deputy Prime Minister and Minister of Foreign Affairs and Expatriates Ayman Al-Safadi and a number of ministers and senior officials.