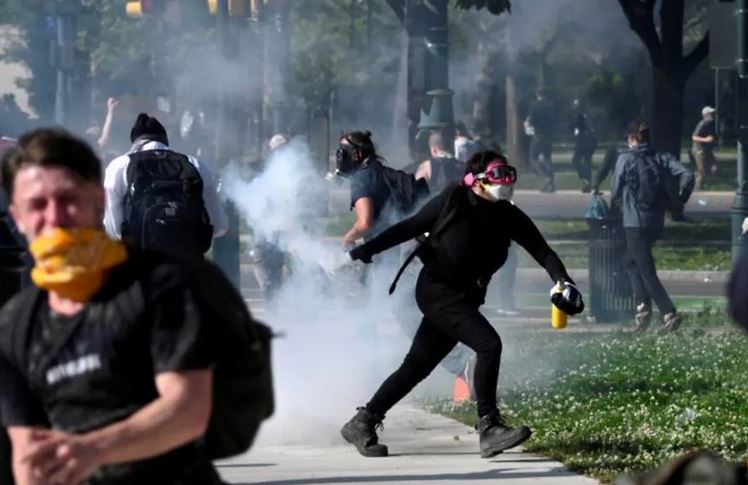 A protester returns a tear gas cannister during a march against the death in Minneapolis police custody of George Floyd, in Philadelphia, Pennsylvania June 1, 2020. REUTERS/Bastiaan Slabbers
WASHINGTON - Reuters

At least five US police officers were hit by gunfire during violent protests over the death of a black man in police custody, police and media said, hours after President Donald Trump vowed to use the military to halt the unrest.

Trump deepened outrage on Monday (Jun 1) by posing at a church clutching a bible after law enforcement officers used teargas and rubber bullets to clear the way for him to walk there after he made his remarks in the White House Rose Garden.

Demonstrators set fire to a strip mall in Los Angeles, looted stores in New York City and clashed with police in St Louis, Missouri, where four officers were taken to hospital with non-life-threatening injuries.

"Officers are still taking gunfire downtown & we will share more info as it available," St Louis Police said on Twitter. 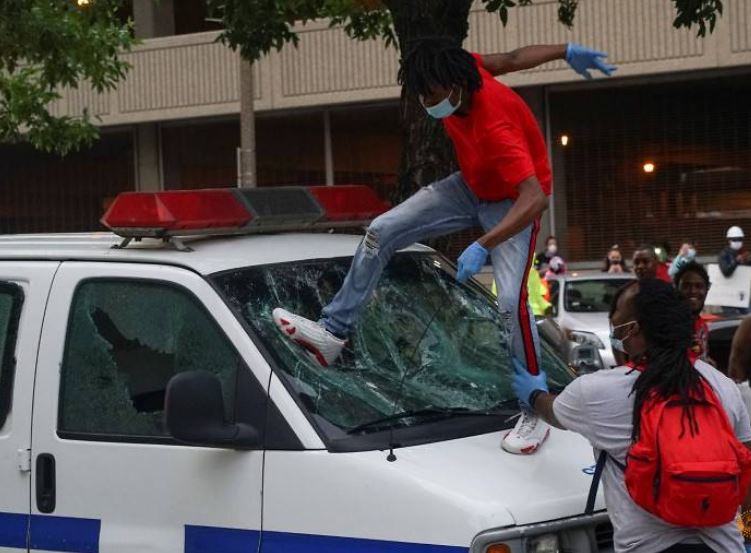 A protestor kicks in a window on a Sheriff van during a protest against the death in Minneapolis police custody of African-American man George Floyd, in St Louis, Missouri, U.S., June 1, 2020. Picture taken June 1,2020 REUTERS/Lawrence Bryant

A police officer was also shot during protests in the Las Vegas Strip area, AP news agency said, quoting police. Another officer was "involved in a shooting" in the same area, the agency said without giving details.

It did not give details of the shootings or the officers' condition. Police declined to comment to Reuters.

Nevada Governor Steve Sisolak said in a tweet his office had been notified of two separate incidents in Las Vegas. "The State is in contact with local law enforcement and continues to monitor the situation," he said.

Trump has condemned the killing of George Floyd, a 46-year-old African American who died after a white policeman pinned his neck under a knee for nearly nine minutes in Minneapolis on May 25, and has promised justice.

But, with anti-police brutality marches and rallies having turned violent after dark each day in the past week, he said rightful protests could not be drowned out by an "angry mob".

"Mayors and governors must establish an overwhelming law enforcement presence until the violence has been quelled," Trump said. "If a city or state refuses to take the actions that are necessary to defend the life and property of their residents, then I will deploy the United States military and quickly solve the problem for them."

Floyd's death has reignited simmering racial tensions in a politically divided country that has been hit hard by the coronavirus pandemic, with African Americans accounting for a disproportionately high number of cases. 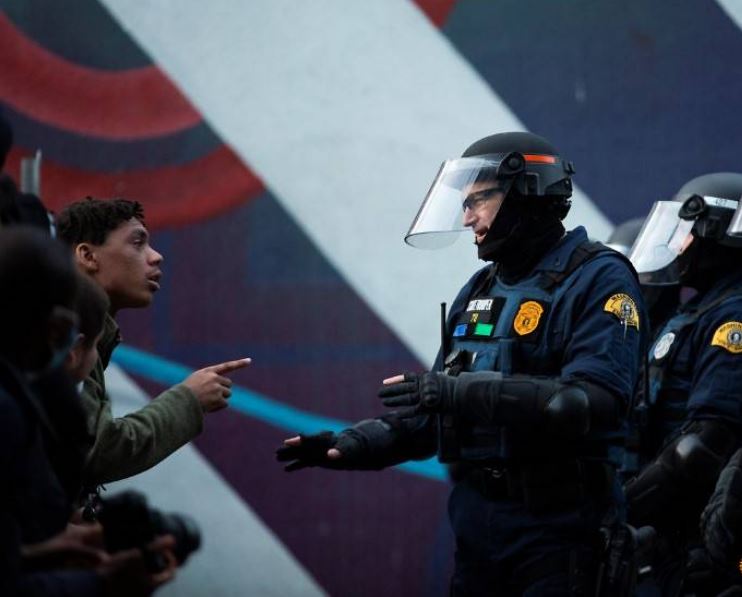 Following his address, Trump walked through an area that had been cleared by police to nearby St John's Episcopal Church, where he posed for pictures with his daughter, Ivanka, and US Attorney General William Barr.

The presiding bishop of the Episcopal Church diocese in Washington DC, Michael Curry, was among those who criticised Trump's use of the historic church for a photo opportunity.

"In so doing, he used a church building and the Holy Bible for partisan political purposes," he said on Twitter. The church suffered minor fire damage during protests on Monday night.

The White House said it was clearing the area before a curfew.

A few hours later, thousands of people marched through Brooklyn, shouting "Justice now!" while some passing drivers honked in support.

Two police officers were struck by a car at a demonstration in Buffalo, New York, on Monday night. Officials said the driver and passengers were believed to be in custody. It was not clear whether the incident was intentional.

In Hollywood, dozens of people were shown in television images looting a drug store. Windows were shattered at a nearby Starbucks and two restaurants. 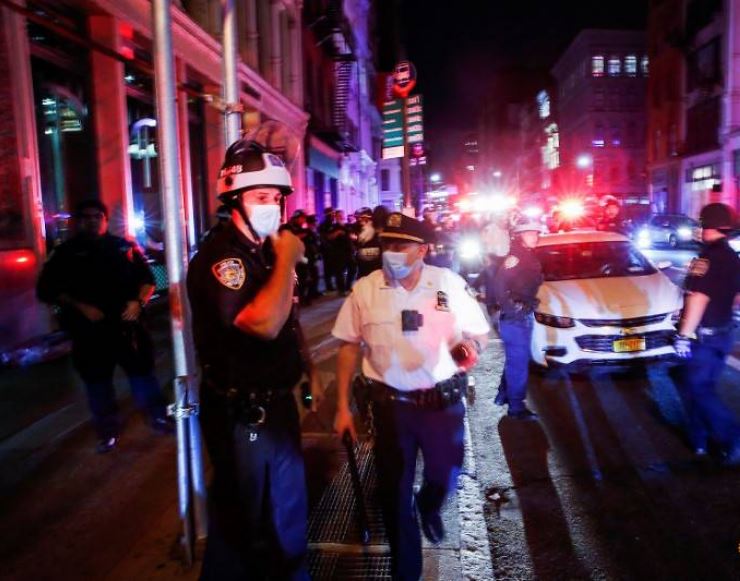 NYPD officers try to take control of the Soho area as they detain protesters who were looting in local stores after marching against the death in Minneapolis police custody of George Floyd, in the Manhattan borough of New York City, U.S., June 2, 2020. REUTERS/Eduardo Munoz

A second autopsy ordered by Floyd's family and released on Monday found his death was homicide by "mechanical asphyxiation", or physical force that interfered with his oxygen supply. The report says three officers contributed to his death.

The Hennepin County Medical Examiner later released autopsy findings that also called Floyd's death homicide by asphyxiation. The county report said Floyd suffered cardiopulmonary arrest while being restrained by police and that he had arteriosclerotic and hypertensive heart disease, fentanyl intoxication and recent methamphetamine use.

Derek Chauvin, the 44-year-old Minneapolis police officer who kneeled on Floyd, was arrested on third-degree murder and second-degree manslaughter charges. Three other officers involved in the arrest have not been charged.

Floyd's death was the latest case of police brutality against black men that was caught on videotape and prompted an outcry over racism in US law enforcement.

Dozens of cities are under curfews not seen since riots after the 1968 assassination of Martin Luther King Jr. The National Guard deployed in 23 states and Washington, DC.

Most Americans were just emerging from weeks of strict "stay-at-home" orders imposed over the pandemic.

On Monday, dozens paid their respects to Floyd outside Cup Foods, the scene of his death, leaving flowers and signs. A little girl wrote, “I’ll fight with you,” in the road.

Terrence Floyd, the victim's brother, told the gathering he wanted people to get educated and vote rather than resort to violence and destruction. "Let's do this another way," he said.

"I want to see more community and this country come together and stop letting the powers that be divide us," he said.