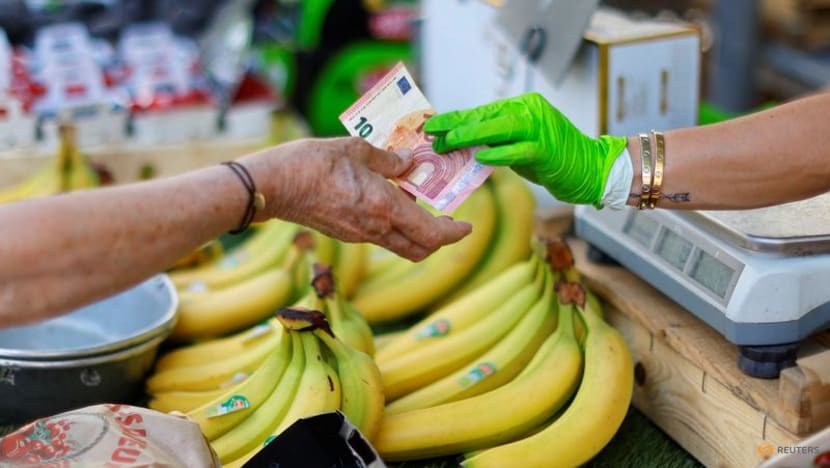 The euro fell across the board on Thursday after weak German and French PMI data confirmed the eurozone economy was struggling to gain traction, prompting traders to trim aggressive interest rate hike bets by the European Central Bank.

The German economy, Europe's largest, suffered a sharp loss of momentum at the end of the second quarter, with falling exports acting as a drag and economic uncertainty and inflation weighing on domestic demand, a preliminary survey showed on Thursday.

The French June flash manufacturing PMI number fell to 51.0 points from May's 54.6, well below a forecast for a smaller fall to 54.0 points.

"The below forecast PMIs fuels debate about worsening growth, softer yields and begs the question how much ECB can genuinely raise rates," said Kenneth Broux, an FX strategist at Societe Generale in London.

Following the data, money markets were pricing in about 30 basis points (bps) of rate hikes in July compared to 34 bps on Monday. Traders also trimmed their expectations of how much the ECB will hike rates by end-2022 to 161 bps compared to 176 bps on Monday.

The Norwegian currency was also one of the big gainers versus the euro after its central bank raised benchmark interest rates by 50 bps on Thursday, its largest single hike since 2002 and twice as much as expected by most economists.

The euro's losses yanked the U.S. dollar from earlier lows and sent the greenback into positive territory against its rivals after cautious comments by Federal Reserve Chair Jerome Powell on Wednesday weighed on sentiment and pushed Treasury yields lower.

Powell said in testimony to Congress that the central bank is fully committed to bringing prices under control even if doing so risks an economic downturn.

He said a recession was "certainly a possibility," reflecting fears in financial markets that the Fed's tightening pace will throttle growth. Powell testifies to the House later in the day.