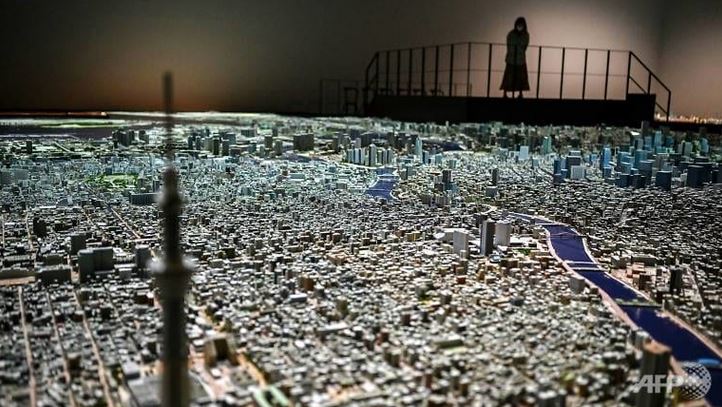 It's Tokyo, but unlike you've ever seen it before - a miniaturised 1:1000 scale version of one of the world's biggest capitals, displaying everything from sea levels to population densities.

Pairing a 3D model with projection mapping, the Urban Lab project at Tokyo's Mori Building aims to display information about the Japanese capital in different and visually arresting ways.

"We usually can't grasp the whole picture of the city in a bird's-eye view, but looking at it this way, we can see how attractive Tokyo is as well as its challenges," Shinji Takeda, senior manager at Mori Building, told AFP at the facility.

Launched in 2019, the project covering 13 of Tokyo's 23 districts is intended to help researchers and private developers think about the city.

Projection-mapping on top of the model offers a range of information - including how railways intersect with the physical landscape and where businesses and populations are concentrated.

Road and railway network projections throw into relief the comparatively underdeveloped parts of the megacity, while other visual information depicts Tokyo's various vulnerabilities.

For example, mapping over the model with altitudes and sea levels illustrates which areas are prone to flooding from rivers, canals and the sea.

Given Japan's exposure to natural disasters, ranging from earthquakes to typhoons, understanding those vulnerabilities is key, said Takeda.

He cited the example of a massive 2019 typhoon that caused significant flooding along Tokyo's Tama river.

"We saw the importance of learning how the city has developed in terms of its terrain and which areas are more vulnerable in heavy rain," he said.

"In this facility, you can see not only how earthquakes but also a variety of other issues affect a disaster-prone Tokyo."

Tokyo is often considered to be expanding and developing wildly, without a particular plan, in part because earthquake requirements are regularly updated and buildings are overhauled to meet new rules.

And the exhibit will keep changing with the city, updated each year to reflect the loss of old buildings and the appearance of new ones.

"Tokyo keeps growing," said Takeda. "It's not a city where visitors simply see history as if they're reading an old textbook.

"It keeps changing and growing every day, and that is another element of the city that people can enjoy."