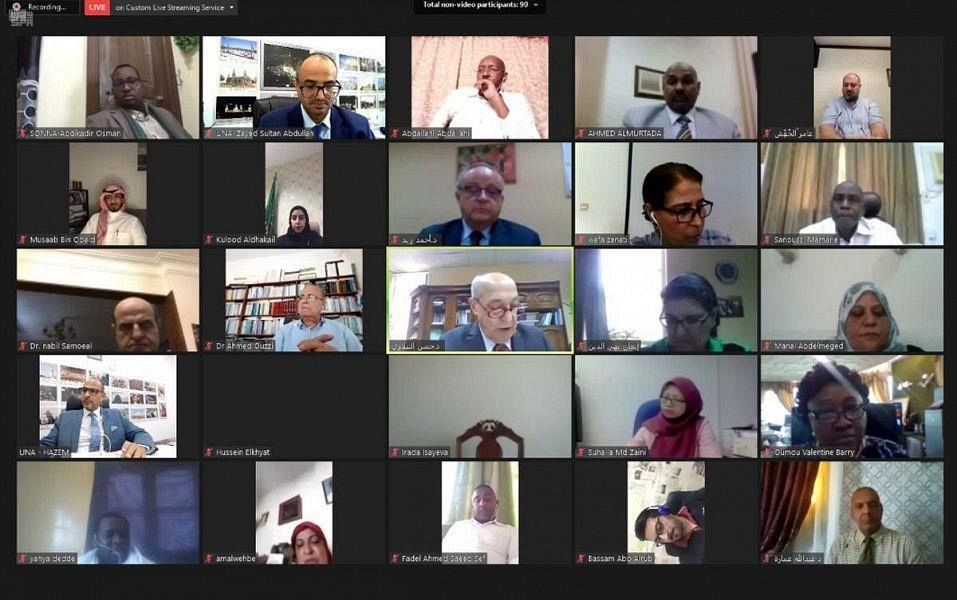 UNA, ACCD Hold Workshop on Media Interactions with Impacts of Child Rights in Light of COVID-19

The Union of OIC News Agencies (UNA) on Wednesday organized, in cooperation with the Arab Council for Childhood and Development (ACCD), a workshop on "Media interaction with the implications of child rights in light of the coronavirus crisis".

The workshop – which was held in partnership with the Organization of Islamic Cooperation (OIC) and the Islamic Broadcasting Union (IBU) – benefited 250 media professionals from news agencies, radio stations, TV channels, newspapers and electronic platforms, from 40 OIC Member States as well as from among Muslim minorities in non-member countries.

The workshop, conducted in Arabic with translation into English and French, was administered by Dr. Ahmed Zayed, Professor of Sociology at Cairo University, Egypt. He tackled the health impacts of the COVID-19 pandemic on children and the negative consequences on their health, development and protection, due to the disruption for the routine activities of families, friends and the entire society. According to reliable estimates, the suspension of measles immunization campaigns in at least 23 countries has affected to date more than 78 million children up to the age of nine.

As for the psychological effects, the pandemic has caused a state of anxiety, as a result of infection with the virus, or loss of work, which can be transmitted to children. The pandemic has also disrupted the daily routine for children and caused them emotional and psychological distress, due to the death, illness, or separation of a loved one or fear of disease.

Dr. Zayed stated that the quarantine and isolation measures have created fear and panic and increased the levels of tension in the community, especially among children. He drew attention to the increase in abuse and domestic violence against children, and increased risk of sexual exploitation of children, including sex for assistance and forced early marriage. He warned that prolonged home confinement may increase the possibility of children’s exposure to physical and psychological violence.

The lecturer also spoke about the educational effects, particularly losing organized schooling after the right to education for more than 1.6 billion children worldwide has been disrupted as 190 countries around the globe have imposed school closures. He pointed to the gap in the home academic achievement versus school achievement, and the loss of touch with the teacher.

The workshop addressed the impact of the COVID-19 crisis on children's rights. The preoccupation with fears may lead to shifting public responsibility for childhood to other concerns, as the exceptional and unprecedented conditions caused by the pandemic have compounded the vulnerability of some groups of children, including children with disabilities, those living in poverty, children living on the streets, refugees, and children with pre-existing health conditions.

Zayed stressed the importance of providing school activities that educate children on how to face problems; designing movies and electronic games to teach children about facing danger, and positive physical and psychological self-management; and providing alternative and innovative solutions for children to enjoy their rights to rest, leisure, entertainment, and cultural and artistic activities, which is essential for their health, well-being, development of creativity, imagination, self-confidence.

He also emphasized the importance of identifying flexible strategies to communicate with communities remotely, to promote safe coping mechanisms; and working with traditional and religious leaders and media professionals to adapt traditional practices to new post-pandemic future situations.

The lecturer called for developing a post-pandemic recovery plan; working in a spirit of cooperation with children and adolescents to help bridge generation gaps and contribute to strengthening solidarity between different age groups; disseminating child-friendly social messages about the risks and vulnerabilities children face during an outbreak; and creating online sessions and support groups to enable people to interact positively.

For his part, UNA Assistant Acting Director-General Mohamed Al-Yami commended the cooperation between the Union and ACCD to serve a wide range of social sectors, which started with a workshop on "Media interaction with the implications of child rights in light of the coronavirus crisis".

Al-Yami added that the Union was quick to respond early to the consequences of this pandemic, through enlightened media cooperation with member news agencies, within the overall work system of the OIC, which has mobilized all its powers, resources and capabilities, as well as the capacities of its organs and institutions to provide support and assistance to the Member States in the fight against the virus.

He noted that the Union launched its first Media Forum entitled "The Role of News Agencies in Supporting Anti-Coronavirus Efforts", on 23 Ramadan 1441 AH (16 May 2020), under the patronage of Acting Media Minister, Chairman of the UNA Executive Council Dr. Majid bin Abdullah Al-Qasabi.

The Assistant Acting Director-General stated that the training program for developing the skills of media professionals was one of the outputs of the UNA Media Forum, which aims, in its first stage to train 2,200 media professionals. He pointed out that two workshops were conducted in Arabic and French within this program, on "Methods of fact-checking news during crises and spread of rumors", benefiting 300 media professionals.

Al-Yami said that within the framework of the training program, the Union held on 14 July a virtual media forum whose guest was OIC Secretary General Dr. Yousef bin Ahmed Al-Othaimeen, indicating that the forum was attended by 140 media and diplomatic personnel.

He thanked the government of Saudi Arabia, led by Custodian of the Two Holy Mosques King Salman bin Abdulaziz Al Saud and HRH the Crown Prince, for the unlimited support to the Union whose headquarters is based in the Kingdom of Saudi Arabia and for the provision of every assistance that enables the Union to assume its role in serving media in the OIC countries.

In his speech, ACCD Secretary General Dr. Hassan El-Bilawi conveyed the greetings of Prince Abdulaziz bin Talal, President of the Arab Council for Childhood and Development, to the participants in the workshop, and praised the cooperation with UNA through active partnerships.

El-Bilawi mentioned that the workshop comes in continuation of ACCD's efforts and initiatives to tackle the risks and challenges presented by the coronavirus, saying it was imperative the Council engage in the protection of children, families, and the destitute.

The ACCD Secretary General stated that work is underway – with the support of the Arab Gulf Program for Development (AGFUND) – towards implementing the Council model for socializing the Arab child and achieving the 2030 Agenda for Sustainable Development Goals (SDGs), and supporting and enabling the Arab child to enter the era of the Fourth Industrial Revolution (4IR).

El-Bilawi called for tackling the COVID-19 impacts, in solidarity and cooperation between governments, civil society organizations and the private sector, while looking to the future, in which we amend our behaviors and modalities of life to develop ways for children's care and protection, as well as working to establish social protection policies, and to transform these policies into legislation, laws and culture for a decent life for children, women and the marginalized people.