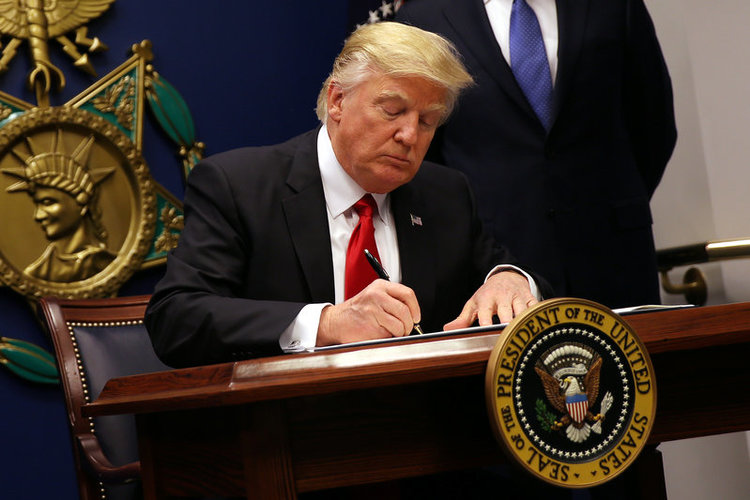 US President Donald Trump’s Administration implemented on Monday the most important electoral promises of President Trump's campaign to impose powerful US sanctions on hundreds of Iranian entities and sectors including sectors of Iranian energy and banking a matter which deprives the Iranian regime of the most important  national income. Despite the international pressure and European attempts to persuade the US administration to retract its decision, the US Administration declared that it would not budge on sanctions or withdraw from the nuclear deal except for Iranian compliance to the US Administration’s 12 demands including changing the Iranian behavior, the abandonment of Iranian regime’s ballistic missile program and its supporting to Houthi Militias and Hezbollah
Brian Hook: the most powerful sanctions on Iran to stop its harmful role in the Region
In a press conference on Monday, US Secretary of State Mike Pompeo said: “The Iranian regime has a choice. It can either do a 180-degree turn from its outlaw course of action or act like a normal country, or it can see its economy crumble.” However, Europeans abide by the nuclear deal with Iran, the largest number of private European companies withdrew from Iran in recent months to spare themselves the US sanctions and not to risk losing access to the US economy sectors including the banking one, a matter which tightens grip on Iran and prevents it from receiving oil money in case it managed to sell some of its crude oil. According to the US State Department, companies in more than 20 countries stopped purchasing Iran’s crude oil and Iran's oil exports have shrunk by about 1 million bpd a matter which deprived the Iranian regime of USD 2.5 billion together with sanctions-imposed oil sector. In addition, sanctions include over 200 persons and vessels in Iran’s shipping and energy sector; Iran Air, the national airline of Iran, and more than 65 aircraft; the placement of nearly 250 persons in associated block properties on the Specially Designated Nationals list; the Atomic Energy Organization of Iran
In a statement made by US Treasury Secretary Stephen MNUCHIN, he said: “The US Treasury imposed the most impactful sanctions ever seen and the Iranian regime must realize that it will face increasing financial isolation and unprecedented economic stagnation.” He also added: “We are determined to make sure that the Iranian regime will not have any financial resources to be used in boosting terrorism.”
On the other hand, although sanctions are imposed on the Iranian regime, Iranians will wake up today to a world darker. Prices of all commodities and materials will rise. The US Administration confirms that the Iranian people should know that their regime is responsible for all these disasters hitting their country and this regime must realize that all its crimes and its evil practices will not go unpunished.

Although the value of the Iranian Toman fell by 70% last year, the new sanctions are expected to cause the most harmful to the Iranian economy because such sanctions affect money transfers, crude oil and transportation. The US administration gave Iran and the Europeans eight or 12 months period to reach an alternative nuclear deal that includes stopping Iran's missile ambitions and activities destabilizing the Middle East region along with stopping recruiting and funding terrorist militias in the region. But this period has passed without an agreement satisfactory to the US administration.
The Iranian regime had a golden opportunity under former US President Obama who cancelled sanctions imposed on Iran a matter which allowed Iran to earn USD billions. The Iranian regime exploited this gold opportunity and began to increase its terrorist activities in Yemen, Iraq, Syria and Lebanon, deepen regional crises and foster sectarian tensions.
In an interview with “Riyadh” former CIA official Norman Roule said: “The US sanctions are being imposed on Iran at the worst time when the regime suffers from a crisis of water shortages, environmental and economic crises and political divisions within the Iranian regime. He predicts that Iran's stability will vanish due to the economic downturn in the coming months. Roule also says: “This US strategy adopted by the US against Iran has proved the weakness of the European stances that cannot halt the determination of the American plan.”  He also added that there is another weak player i.e. Moscow whose air forces provided air coverage to armed militias loyal to Iran.  However, Moscow has not been able to take any step to save Iran's economy or help it in any way to face US sanctions.
In a conference call with a number of journalists attended by “Riyadh”, US envoy to Iran Brain Hook put spot light on the new US diplomacy against Iran. This diplomacy sides with the Iranian people to end their suffering. Trump’s Administration considers Iranians as victims of this brutal Iranian regime. He added: “The Iranian people have lived 39 years of crises caused by bad behaviors of this regime and these people are fully aware that the bad conducts of their regime are the main reason for this economic collapse not the USA. Hook cited some indictors that led to the destruction of the Iranian economy. He addressed Iranians saying: “Tehran regime neglected and destroyed agricultural land in Iran a matter which resulted in the deterioration of this vital sector while Iranian funds are spent in Iraq, Yemen and Syria. Hook mentioned that Iran spent USD 4.6 billion in Syria and provided Hezbollah with more than USD 700 million in addition to USD millions to Houthi Militias. Hook described the new US sanctions as the toughest in Iran's history and the key aim of these sanctions is to stop Iran from destabilizing the Middle East region, stressing that Iran lost USD 2 billion of revenues of oil due to these sanctions.