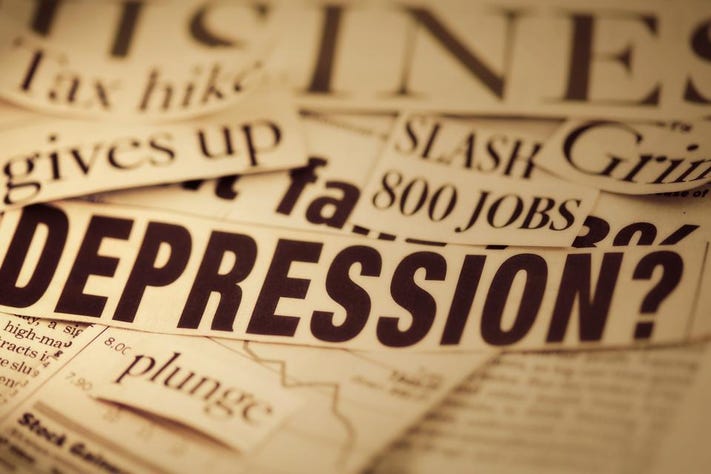 DEPRESSION AND THE ECONOMY

Depression is a mood disorder that causes a persistent feeling of and loss of interest and sadness, and may be accompanied by guilt and low self-esteem.

Depression affects how we feel, think and behave and can lead to a variety of emotional and physical problems.It is usually accompanied by a group of physical symptoms such as:

• A change in appetite,

• Thoughts of death or attempts at suicide.

On the other hand, that to clarify that Sadness is normal, feeling sad is not the same as depression, as the depression is a pathological condition.

It is important and required to see a doctor if symptoms of depression persist for a relatively long time.

Organization for Economic Co-operation and Development, estimates that the absence of proper mental health costs the global economy, 3.5% of GDP, including depression, trouble sleeping, panic attacks and other forms of mental health disorders.

According to "Forbes", various mental disorders cost American companies 80-100 billion dollars annually, while a study by Yale University estimates the same losses at about 193 billion dollars lost by the American economy due to the lack of performance that required quality.

The study adds that the lack of recognition of employee mental health can harm productivity and professional relationships, as it is estimated that the US economy loses 17-44 billion dollars due to depression each year.

One of the practical matters of assistance is measuring the depression rates of the person and employees, the most famous is the “Beck model to measure depression”, which gained its name from the American psychologist “Iron Beck”.

Beck model consists of 21 questions, by answering it that will show the degree of a person’s depression, which is determined based on the total scores obtains as below:

• 9 degrees or less - not depressed

Thus, the degree of depression is determined, and then to find ways  to get rid of it, so that the model itself considered a means of treatment at the same time, by reversing negative responses by using and implementing positive ones.

On the other hand, the employees whom receiving appropriate treatment reflect positively on the economy, as the economy recovers 4 dollars for every dollar spent on caring for people with mental health problems.

Another solution in the work environment suggested by Harvard study that employees do not have to go to other places to express their anger or frustration, better to communicate with management and colleagues to raise their concerns and suggestions.

Another study conducted by “Google” on its employees that come out of the employees sense of Job security, which inform them that they could suggest whatever they wanted without worrying that they would be exposed to material or moral harm, when these employees whom suffer from anxiety or depression realized this statement, their productivity has improved by up to 80%.

Depression is a critical disease that disrupts self-development, human development, and the domestic and global economy. Therefore,

All are important and recommended as that will contribute to avoiding or reducing depression rates in societies and raise the life quality.